His Holiness Urges Tibetans From Tibet to Study Buddhist Philosophy

Dharamshala, India -- The spiritual leader of Tibet, His Holiness the Dalai Lama has urged Tibetans who have recently arrived in India to study Buddhist philosophy, rather than simply familiarizing themselves with prayer. 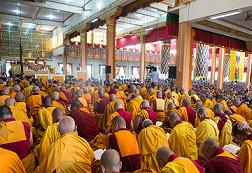 The 77-year-old Tibetan spiritual leader made his point in front of around 30,000 people from 53 countries, who are currently attending his 14 day teaching on the 18 Great Stages of the Path to Enlightenment (Lam Rim) at Gaden Changtse monastery in Mundgod, Karnataka, on December 1.

The crowd included monks from Karnataka's great university monasteries, Drepung, Ganden and Sera, which were all resurrected in the south Indian state after their Tibetan predecessors were overrun and controlled by Chinese forces following China's occupation of the country in 1959.

“In Tibet, many Tibetans feel that studying Buddhism is only the responsibility of monks,” he said.

“Some monasteries offer only prayer, no philosophical study, and many lay people are good at prayer, but have no concern about studying Buddhist philosophy. This is a big mistake.

“Nowadays in Tibet the situation is very critical and many people who have studied Buddhism, the older generation, have passed away, and it is very rare to see a new generation of Buddhist practitioners.

“Usually nowadays I’m not only talking to Tibetans, but to Chinese, Japanese, Vietnamese, Korean, Burmese, Sri-Lankan and Taiwanese Buddhist friends. We are all the same Buddhists as our grandparents, and now we should all be 21st Century Buddhists.

“We should study and understand what Buddhism is,” he continued.

“Buddhism is different from other religions which believe that God created everything, as the Buddha said that we are all our own protectors.

“Everything we do, we do by ourselves, so studying Buddhist philosophy is very important.”

The Dalai Lama arrived in India's largest Tibetan settlement on November 29, before commencing the teaching the following day.

Upon arrival he visited Drepung monastery, where he met with the head of the Gelugpa school of Tibetan Buddhism, Gadan Tri Rinpoche, and the monastery's abbot, Lobsang Tenpa, who made long life offerings in his honour, before he visited a stupa containing the relics of his former tutor, the sixth Ling Rinpoche.

Alluding to his decision last year to retire from his role as Tibetan political leader, after which Sikyong Dr Lobsang Sangay was democratically elected to lead Tibet's exiled community, His Holiness the Dalai Lama explained how the Gadang Podrang, part of the original Drepung monastery in Lhasa, had been the traditional seat of the Dalai Lamas until 1642, when the fifth Dalai Lama became Tibet's political and spiritual leader and established the city's iconic Potala Palace, where they remained until the current Dalai Lama's escape from the country following Chinese occupation.

“When I was 16, I took political responsibility for Tibet from Sikyong Tadrak Rinpoche (who ran the country while he was still considered a minor,)” he said.

“Sixty years later, I was able to proudly and happily hand over that responsibility to a political leader elected by a majority of Tibetan people.

“When we first arrived in India we tried to establish a democratic system and now this has happened my long term wishes and hopes have been fulfilled.

“If I were in Tibet it would now be time for me to return to Drepung monastery.”

He then visited the nearby Gaden Chartse monastery, where he opened a scholar's debate on the Jangchup Lam Rim Chemo text (Atisha's lamp for the Path to Enlightenment.)