Mysore, India -- Tibetan monks are praying in Mysore, India, for the victims and families of Sandy Hook Elementary School in Newtown, as well as the Newtown community. The school was the site of a horrific tragedy where a lone gunman killed 20 kindergartners and six adults last month, on Dec. 14. 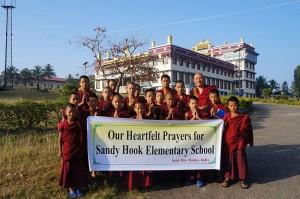 << Students and teachers at Sera Mey Monastery in India offer their prayers for the victims and families of the Sandy Hook Elementary School shootings and the community of Newtown. Gyumed Khensur Rinpoche, spiritual director of Do Ngak Kunphen Ling, Tibetan Buddhist Center for Universal Peace (DNKL), in Redding, and Geshe Dhargye, right, in the back row, resident teacher and scholar, organized the prayers. They are currently visiting and teaching at Sera Mey Monastery.

“We are all one. Even on the other side of the world people are praying for you. We send prayers of compassion from Sera Mey Monastery in India,” said Geshe Lobsang Dhargye of Do Ngak Kunphen Ling, Tibetan Buddhist Center for Universal Peace (DNKL), in Redding.

Currently, Gyumed Khensur Rinpoche, spiritual director of DNKL, and Geshe Dhargye, resident teacher and scholar, are visiting and teaching at Sera Mey Monastery in India. As neighbors in Redding to the Newtown community, they share the sorrow and suffering brought forth by the tragedy at Sandy Hook Elementary School. Rinpoche and Geshe organized weekly prayer services for the victims, families and community.

Gyumed Khensur Rinpoche is also head of Thewo Khangsten in Sera Mey Monastery in India. As a senior scholar of the Gelugpa Tibetan Buddhist lineage, Rinpoche and Geshe offer traditional and authentic teachings in Redding and at the monastery in India.

Sera Mey Monastery history links directly to Buddha Shakyamuni. Sera Monastery is one of the “great three” Gelugpa university monasteries of Tibet. During the 1959 revolt in Lhasa, Sera monastery suffered severe damage. After the Dalai Lama took asylum in India, many of the monks of the Sera Monastery who survived moved to Bylakuppe in Mysore, India. They established a parallel Sera Monastery with Sera Mey and Sera Jey colleges and a Great Assembly Hall, similar to the original monastery.

There are now more than 3,000 monks living in Sera. This community has spread its teaching activities to several countries by establishing Tibetan Buddhist Dharma centers which share the knowledge of Buddhism, such as the DNKL Tibetan Buddhist Center in Redding (dnkl.org and facebook.com/DNKL.Buddhist.Center).