Research on to trace journey of Buddhist monks in country

VISAKHAPATNAM, India -- At a time when technology has literally turned into a religion for many, a Vizag-based research scholar has taken up a scientific study using nuclear analytical techniques (NAT) to trace the route taken by Buddhist monks in the country centuries ago to spread the word of Gautam Buddha. 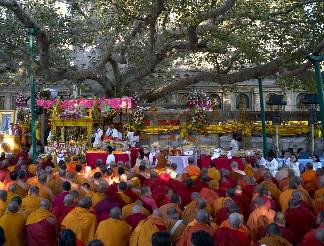 Using historical artefacts such as clay inscriptions, bricks, roof tiles, coins, stones and paintings recovered from Buddhist sites, the study will try to discover the route traversed by these monks centuries ago across the country, including Andhra Pradesh.

The study has started with the analysis of a collection of pottery and bricks at the 25 Buddhist sites out of 140 in Andhra Pradesh. The 25 sites include Pavuralakonda, Simhachalam, Thotlakonda and Bavikonda in Visakhapatnam, Jagathipadu, Dantapuram and Salihunda in Srikakulam as well as Neelavathi and Ramatheertham in Vizianagaram district, besides some areas in Telangana region.

Research scholar Dasari Kishore Babu said the research is being carried out at Gitam Institute of Science (GIS) in collaboration with the Trombay-based Bhabha Atomic Research Centre (BARC), Bhubaneswar-based Institute of Physics and Hyderabad-based department of archaeology and museums, government of Andhra Pradesh. Mumbai's UGC-DAE Consortium for Science Research is providing an annual funding of Rs three lakh to the project, he added. GIS principal N Lakshmana Das is the guide for the study.

According to the Kishore Babu, while the authorities concerned, including the department of archaeology, have information about the presence of Buddhist monks at various places in the country, they are yet to ascertain the route they took and the exact period. "This is what we intend to discover. We are applying nuclear science to glean scientific proof of the activities taken up by the monks," said Kishore Babu, a research student of the Department of Electronics and Physics at GIS.

The study that started four years ago, may take another three to four years to wrap up, said Kishore, pointing out that while existing details available with the archaeology department authorities can provide approximations, data from the nuclear study will pinpoint the exact age and period of the Buddhist era. "The archaeology department authorities currently say that the age of the clay potteries or inscriptions of the Buddhist religion propagators dates to about 4th Century BC. The NAT will help reveal the facts," he said.

Explaining the present status of the study, Kishore said it comprises four main components such as collection of clay potteries of the monks, determination of their age and origin through the development of a Nuclear Analytical Technique (NAT).

"As on date, the NAT has been developed and some scientific analysis has also been conducted on the inscriptions for age determination," Kishore said. GIS awarded him a PhD for his thesis on `Provenance Studies of Archaeological Artifacts Using Nuclear Analytical Techniques' two weeks ago, in which he developed the NAT.

"The concentration of elements depends on the place and preparation of the artefact, which is why the determination of concentration of elements, including those at the trace level, becomes more important. There are some groups of elements like alkali, alkaline, transition and rare earth elements that are present at minor and trace levels, which are important for establishing provenance (chronology). Elements that are non-volatile and immobile have similar geochemical properties and show high stability in clay minerals and are good candidates for a provenance study," Kishore added.