Nakhda, India -- At Vishal Hadmatiya village in Bhesan taluka, 21 km from Junagadh, a statue of Dr B R Ambedkar greets visitors. It's been a week since all the 60 families in this Dalit neighbourhood 'converted' to Buddhism at an event in Junagadh. The organisers of the event have claimed that a total of 60,000 Dalits converted to Buddhism. 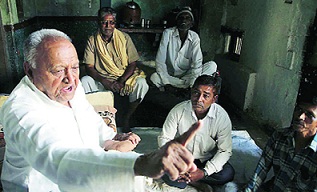 Dahya Vaghela, 65, a respected elder, says he attended the conversion rally for a 'haircut and shave'. "Local barbers refuse to give me a haircut or shave, saying that he will not get any upper caste customers. So I have to travel all the way to Junagadh. We also have a separate temple," he says. Paintings and photographs of Ambedkar adorn the walls of his house.

While Dalit families in the area get water from the same tank as upper caste Hindus, they are not allowed to enter the local Ram temple.

"My children play with upper caste children. But they have to sit separately while eating their lunch. They ask me why they are not allowed to eat with those children," says Dahya's son, Magan, 35, a farm labourer.

"The main issue is of self-pride. The concept of defilement due to physical contact with a Dalit has waned, but mental untouchability still persists. The contempt that an upper-caste Hindu shows towards a Dalit is humiliating. While the situation will not change overnight, embracing Buddhism is an ideological revolution which will bear fruit in future. Maharashtra is witnessing a change six decades after Ambedkar and others led by him embraced Buddhism," says Ravji Vaghela, Dahya's brother who retired as a head postmaster.

"Our descendants can now simply say they are Buddhists when someone asks them about their caste. They would thus be saved of the humiliation attached with the term Dalit," he adds.

In Saurashtra, it is quite common to ask a stranger his caste.

Dalits living in the northern and eastern parts of Junagadh complain that they often face discrimination. Most of them work as agricultural or construction labourers, They say they have to carry their own utensils for eating food or drinking water.

"Why are Dalits made to eat separately at their workplace? If a Dalit opens a hotel, will people from other community eat there? Will they drink tea at a stall run by a Dalit? Why does a barber refuse to shave a Dalit?" asks Jaydev Bapa, an elderly resident of Vijapur village near Junagadh.

"With Independence, Dalits got equality before law but we have not been accorded social equality. Our community members are labourers, so will they go to work or complain to authorities about the injustice? While dogs and crows are worshiped, members of a particular community are not even being treated as human beings. This is the reason why they community has been forced to embrace Buddhism," he says.

"With religious gurus exhorting people to bring back the old culture and traditions, we are afraid that our woes will not end. Hence, we are embracing Buddhism which preaches equality," he adds.

While the upper-caste elders seem unwilling to change, the younger ones show a broader outlook. "The community will have to develop and create a new environment for themselves. Changing religion is hardly going to change things in the village if such a development does not take place," says an upper-caste farmer.

In Nakhda village, 33 km from Veraval town in Gir Somnath district, the situation is a little different. Dalits are not made to eat separately, and are also allowed to attend upper-caste social gatherings. Govind Chavda, a Dalit who was the first to attain a Masters degree in the village, and Vallabh Nagar, a Brahmin head of the village, were instrumental in bringing about the social acceptability of the community about three years back.

"We are very happy with the harmony in the village. But the term Dalit comes with a tag," says Mulu Jadav, 65, a farmer. He admits that he knows nothing about his new religion, Buddhism. "But we have to change this situation," he adds.

"Till a few years ago, I had to carry my own utensils while working on a farm. But this has changed now. I hope things will keep improving," says his daughter-in-law Geeta, 28.

"Practically, there may not be a sea change in people's behaviour. But I am convinced that the future of our children will be different," says Chavda, the man credited with bringing about "equal" status for his community members in the village.

In Kodinar taluka of Gir Somnath district, which boasts of a large population of educated Dalits, around 200 families are reported to have converted to Buddhism.

"The practice of untouchability no longer exists here, but the mentality lingers. However well-educated or well-off a Dalit may be, he is still at the bottom of the caste hierarchy," says Balude Vaghela, a retired school principal.

But the change in religion is unlikely to have any political consequences. "In this part of the district, a candidate matters more than the party he represents. Dalits don't have the numbers to directly influence an Assembly poll, so they generally tend to go with the majority community. The religious conversion, if any, will not affect their political affiliation," says Jetha Solanki, BJP MLA from Kodinar and a Dalit leader.

Meanwhile, Junagadh District Collector has ordered a probe into the October 13 mass conversion, calling it illegal under the Freedom of Religion Act 2008 which bans conversion without permission from the state. "The organisers had only sought permission for a religious conclave, and had said that there would be no mass conversion. But we have received reports that a mass conversion took place. We shall take appropriate action based on the findings of the probe," says Pandey.

He says the administration only received applications from 11 individuals for changing their religion, adding that the rules for individual conversion and mass conversion are different.