Mumbai, Maharastra (India) -- His Holiness the Dalai Lama began the final day of his stay in Mumbai by unveiling the foundation stone for the Somaiya Institute of Buddhist Studies, following which he spoke briefly and answered questions in the Somaiya School Hall. 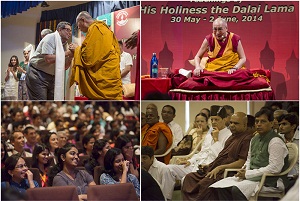 Asked his advice on how to live a good life he pointed out once again that it is time to be aware that the present education system, enmeshed in materialism as it is, is not adequate. He said there needs to be a systematic approach to introducing inner values, a warm-hearted concern for all human beings, into education. It needs to be an approach that has universal appeal, not restricted to this or that religious tradition, an approach, inspired by India's understanding of secularism, that includes everyone. He said that work has begun on this project in relation to secular ethics, but more research needs to be done.

He continued to expand on the theme of secular ethics in a talk to students of the Somaiya College in the Engineering College Hall.

"Young brothers and sisters, you are all part of the 21st century generation, whereas my generation belongs to the 20th century. We created all kinds of problems that it's going to be your responsibility to solve and clear up. Since many of the problems we face today are manmade, we won't solve them by prayer but by taking action. Since Independence, India has made great progress, the economy has grown, and yet every year there are more mouths to fill. We need material development, but we may have to rethink how to achieve it."

He mentioned how the centralised economies of the USSR and Eastern Europe collapsed due to stagnation and acknowledged the dynamic force of market driven economies. However, he observed that the capitalist system seems to neglect the huge gap between rich and poor, all of which he said suggests a need for fresh thinking.

His Holiness expressed his admiration for Pope Francis' reprimanding a German Bishop for his opulent life-style. He said that when the people in them are no longer sincere, but only go through the motions, even religious institutions can become corrupt. However, while some people refer to religion as the opium of the people, no one refers to love and compassion, which are the essence of the message of religion. He recalled that Mao Zedong had made such a remark to him and reflected that the Chinese leader might have been surprised to see the interest that scientists today take in Buddhist knowledge of the mind and emotions.

"The reason I emphasize our need for secular ethics," His Holiness said, "is that many people neglect love, compassion, tolerance and contentment because they think of them as religious qualities. However, so long as we are human beings, social animals, we need such values to be able to live together. What's more, scientists are finding that falling prey to destructive emotions is bad for our health."

When a student pressed His Holiness to comment on the Buddha's silence in response to a question about the existence of a creator, he answered that from a Buddhist point of view the explanation of the Four Noble Truths contains an implicit denial. It says that beings and their experiences come about as a result of their action and delusion. Nevertheless, the Buddha also made it clear that his followers should not accept what he said merely out of faith or respect for him, but by investigating and examining it for themselves.

In answer to a question about women, he explained that when human need for leadership first emerged, the criterion was physical strength. Today, when education has rendered men and women equally capable, women should also be more active in leadership. When asked if Buddhism is best, he said he never propagates Buddhism and as stipulated in the Vinaya, the code of monastic discipline, only teaches when invited to do so. He repeated his usual advice that it is generally safer and better to stick to the faith you were born to.

Regarding forgiveness he said it is important to distinguish between the agent and his or her action. He said that when necessary it is appropriate to take steps to counter the wrong actions of others, but not to give in to being angry with them. He said this is what Tibetans do when they openly oppose and resist the actions of hardliners among Chinese officials, but draw the line at being angry with them.

In the afternoon, the final session of teachings requested by the Nalanda Shiksha, he explained the essence of Chapter 8 of Shantideva's 'Guide to the Bodhisattva's Way of Life', highlighting particular verses in the course of his explanation. The theme of Chapter 8 is meditation and His Holiness began by contrasting concentration and analytical meditation. In the course of general instructions he discussed objects that may be the focus of meditation and mentioned that taking the mind itself as the object can be particularly effective. However, it is important, but also difficult to identify the mind. He compared trying to identify the mind that changes from moment to moment to trying to pin down the present. We may feel clear about the past and the future, but the present remains difficult to pin down.

Because to begin with the mind tends to be agitated, His Holiness demonstrated how to perform the nine round meditation which involves physical and mental discipline. It can be effective in clearing away distractions, followed by simply observing and counting the breath in lots of 20, 50 or 100. Later, the chapter deals with generating the awakening mind of bodhichitta. The text says: "Having calmed the mind, generate the awakening mind." He outlined generating equanimity towards all sentient beings as part of both the Seven-Point Cause and Effect Method and the Equalizing and Exchanging Self and Others, quoting Shantideva's advice:

In conclusion, His Holiness told his audience that they had copies of Shantideva's text and urged them to read it whenever they can.

"This is a teaching about how to lead a meaningful life," he said. "Essentially, help others whenever and wherever you can and even if you can't do that, at least restrain yourself from harming them."

Samir Somaiya stepped forward to express gratitude to His Holiness for coming and teaching and thanked everyone who had contributed to making the visit a success. For the Nalanda Shiksha, Anita Dudhane added her thanks and recited in Sanskrit His Holiness's favourite verse:

"For as long as space endures and as long as the world remains, may I too live to dispel the miseries of the world."