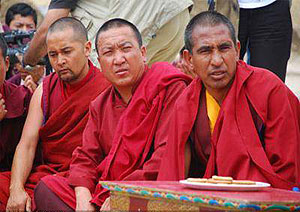 << Shastri, a 'scholar' of comparative religion from Banaras, is the head of Rashtriya Swayamsevak Sangh (RSS) in Leh district; and President of the Tsogspa or 'Ladakh Welfare Sangh'

Shastri, a practising Buddhist like many Ladakhis, was a part of the relief effort in 2010 when a cloudburst caused massive floods and wiped away entire villages in the region.

His 'voluntary organisation', the Ladakh Phande Tsogspa (LPT), was among those which sought to fill in where the government failed, earning goodwill from locals and contributing to the creation of a fertile ground for the first ever LS victory for the BJP from Ladakh.

Shastri, a 'scholar' of comparative religion from Banaras, is the head of Rashtriya Swayamsevak Sangh (RSS) in Leh district; and President of the Tsogspa or 'Ladakh Welfare Sangh', which is a front organization of the RSS. Parivar activists see the floods of 2010 as a watershed event in Ladakh for the organization as hostility from locals towards it decreased notably following its extensive relief work carried out in the aftermath of the floods.

"In Ladakh, people do not know us as the Sangh. They all know Phande Tsogpa, because of our relief work after the 2010 flashfloods. Like the Kashmir's floods today, Ladakh also saw devastation and we put in severe effort in helping the flood affected, which created goodwill for us," Shastri said. But this was not always the case.

In the early 80s, when a team of RSS workers sought to put up the first shakha in Ladakh, there was resistance from Buddhists as well as political parties, as the latter was perceived as a 'missionary organisation' working with an agenda to convert people to Hinduism.

Ladakh Pracharak Dhaniram says, "We had to assure people that, unlike some Christian NGOs, we are not here to convert people from Buddhism to Hinduism." According to BJP's Leh president Cheering Dorjee, anti-RSS hostility grew during the NDA's first reign. "Then J&K Pracharak Indresh Kumar pushed for the Sindhu Darshan Yatra, which was taken up by Atal Bihari Vajpayee and LK Advani by officially inaugurating it on the banks of the river outside Leh town. I think there was some Hindu agenda in that, which they could not fully realise then," Dorjee explained.

He further claimed that the "Hindu Agenda" could not be realised because of anti-RSS campaign by the Ladakh Buddhist Association, Congress and National Conference. But a combination of different tactical measures adopted by the Parivar's outfits helped it overcome the social opposition.

THE LADAKH MODEL OF THE PARIVAR

Committed Buddhist cadres like Shastri and Vice President of LPT, Lama Tashi from Zanskar, were uniquely placed to allay fears among Buddhist majority about the RSS.

For, both are practicing Buddhists of the Mahayana school and the local Buddhist religious organizations appear to be favourably disposed towards them.

Pracharak Dhaniram detailed some subtle but symbolically important practices adopted in Sangh-run institutions here. "We told them (the Buddhists) our agenda is nationalist, not religious. At our Shakhas, we started hoisting both the RSS' saffron as well the colourful Buddhist flag. In schools, we recited Sanskrit prayers as well as Buddhist goddess Manjushree's prayers. This assured the local people that we are not here to carry out conversions," he said.

Other RSS full timers point out towards the social welfare activities taken up since 2010. "When local residents witnessed work done by 'Phande Tsogspa' and Seva Bharati, they warmed up to us.

Schools, computer training centres, environment awareness seminars get better response now," said a pracharak from Jammu. Today, there are at least four active Shakhas in Leh town, and more are sought to be made operational.

BUDDHIST CLERGY WARMS UP TO RSS

Konchuk Namgyal of the Ladakh Gompa Association, which controls all monasteries, said, he has heard positive things about LPT's activities.

"They even call me for their annual Sindhu Darshan yatra, as has been their practice for the past few years of calling five Buddhist priests to offer prayers alongside Hindu priests. I attended it once in 2013. While I am aware about the agenda to convert Buddhists to Hinduism, I have not seen anything like that so far. If they do it, we will oppose it," he said. Dr Tondup Tsewang of LBA was a little more circumspect. "I do not know of links between LPT and RSS.

I had heard about Phande Tsogspa while co-ordinating relief works of NGOs in 2010. They were very much involved in the work," he said.

For more info on RSS: http://en.wikipedia.org/wiki/Rashtriya_Swayamsevak_Sangh