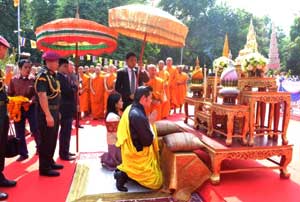 They landed in India on Sunday and proceeded to pray at the Buddhist shrine of Mahabodhi Temple complex in Bodh Gaya.

On Wednesday, the royal couple planted a Bodhi sapling in the Sarnath Temple of Varanasi and also held prayers along with the Buddhist monks.

On Thursday, the duo also offered prayers at the Kashi Vishwanath temple and attended the famous Ganga aarti at Dashashwamedh ghat.