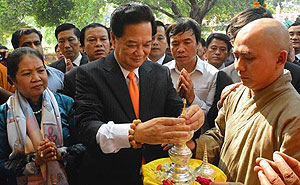 Prime Minister Dung, who is in India on a two-day visit, also circumambulated the ancient Mahabodhi tree under which the Buddha is said to have attained enlightenment.

Mantras of the Theravada and Mahayana Buddhism schools were chanted in Vietnamese as well in deference to Prime Minister Dung and his wife Tran Thanh Kiem.

After the prayers, Prime Minister Dung said that Buddhism binds India and Vietnam together.

He also proposed that there should be direct flights between Bodh Gaya and Hanoi, and sought visa-on-arrival facility for Vietnamese saying it would boost the number of Buddhist pilgrims to the site.

Mr Dung also announced a decision to sign a MoU with India on the Nalanda University as part of reverence for the ancient university where Buddhism studies flourished more than 1,000 years ago, and also to revive Buddhist links, official sources said.

Earlier, the Vietnamese leader arrived at the Buddhist pilgrimage town of Bodh Gaya on a day-long visit.

The 1,500-year-old Buddhist shrine in Bodh Gaya, some 110 km from Patna, is where Gautama Buddha is said to have attained enlightenment about 2,550 years ago.