Amaravati, India -- The State’s search for a new identity has found it rediscovering its Buddhist past, both to attract investments and to craft a new culture. 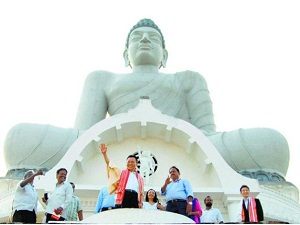 As it goes about building its new capital, Amaravati, Andhra Pradesh is emphasising the Buddhist aspect of its long history of two and a half millennia to attract investments from East and Southeast Asia.

It is a strategy stressed by the Buddhism-loving staff of Chief Minister N. Chandrababu Naidu, and eagerly adopted by him as it fits in well with his mission of raising finances from the cash-rich economies of China, Singapore and Japan.

Ever since the plans for the new capital began to pick up speed earlier this year, the Chief Minister’s advisers have been drawing upon Buddhist motifs from the second century BC Amaravati stupa to embellish their presentations to investors, consultants and functionaries from other governments.

The master plan, commissioned by the State Government to Singapore consultants, begins with a large image of the Buddha in a meditative posture. It is the image of the Dhyana Buddha, whose 125-feet monument adorns the town now. The town was the site of the world famous Asokan-era stupa and used to be the seat of the Vajrayana Buddhism at the turn of the Christian era.

The invitations to last Thursday’s Amaravati foundation ceremony sent out by the State Government to dignitaries in India and abroad featured the beautiful lotus medallion from the ancient Amaravati stupa. The stunning jali art icon of the Buddha also adorns one of the walls in the office of the Chief Minister.

These efforts are all part of an attempt to rediscover the cultural moorings of the Telugu people in the residuary Andhra Pradesh in the aftermath of bifurcation. The government is invoking the Buddhist strains of Andhra Pradesh’s history to provide a global, rather than local, view to the prospective investors.

It all began with the decision in March this year to name the new capital ‘Amaravati’, after the ancient town on the banks of the river Krishna. Old Amaravati is a veritable time capsule that features structures of different periods - the megalithic era, the Satavahana, the Ikshvaku, the Chalukya, the Pallava, the Telugu Chola, the Palnadu, the British, the Dutch and even the Islamic periods. It showcases a living experience that takes it all to create a seamless whole.

“If you dig two feet beneath here, you’ll discover a 1000-year-old artifact,” says E. Sivanagi Reddy, an archaeologist and director of the Cultural Centre of Vijayawada. True enough, workers digging up the foundation of the collapsed Gali Gopuram of the Amaralingeshwara temple there last month found two sculptures, one dating back to the second century and the other to the 13th century AD.

By harking back to old Amaravati and giving it a Buddhist accent, the government aims to accomplish two purposes: one is of course to attract investment from China, Japan and Singapore; the other is to develop a Buddhist pilgrim circuit tying up the many monuments, relics and monasteries scattered all over Andhra Pradesh. These, if refurbished and projected well, have the potential to rival Bodh Gaya in terms of tourist arrivals.

There are signs that this strategy is creating some interest in those eastern capitals, though it cannot be said yet that concrete investments have been pledged. At the Amaravati foundation ceremony on Thursday, the Japanese Minister of Economy, Trade and Industry, Yosuke Takagi, acknowledged that “here is where the seeds of the Japanese nation’s culture and values emerged from” and promised to lend a helping hand to the Amaravati project.

Many of the bureaucrats advising Mr. Naidu on this strategy have taken it upon themselves to showcase the Buddhist face of Amaravati and throw up new ideas for the future. The municipal administration commissioner, Vani Mohan, had a 74-foot Buddha statue installed in the middle of an ancient lake in the heart of Eluru. The state’s principal secretary for tourism, Neerabh Kumar Prasad, is in touch with the Mahayana Buddhist associations in China, Japan, Sri Lanka and Myanmar to promote tourism in the new State. There is also a proposal to build an array of monasteries in New Amaravati. Buddhist orders from Thailand, Tibet and Vietnam have been invited to present their proposals.

However, some advisers of Mr. Naidu are counseling caution as he emphasises the Buddhist element in Andhra’s past, lest it trigger a divisive discourse at home. The Chief Minister’s adviser for communications, Parakala Prabhakar, and heritage conservationist, Amareshwar Galla, an Amaravati native, both say that Amaravati’s past is a composite experience in which no single element can be separated from others.

Dr. Galla says a division of heritage into Buddhist, Hindu and Islamic components is colonial legacy and should not be repeated as it does no justice to the people of Amaravati, who have incorporated elements from all cultures to develop their own.

Heritage conservationists also dismiss the notion that hard-headed investors can be swayed by sentiments. Neither Singapore nor China, the two main focus destinations of Mr Naidu’s investment strategy, have a record of allowing sentiments to rule their decisions.

Deploying faith to pursue what is clearly only a secular objective - raising money for the new capital - is fraught with risks, they warn.

Policymakers involved in the Amaravati project, on Thursday, got an idea of the delicate balance they will have to maintain while executing their strategy. They debated long and hard over whether the logo for Amaravati should feature the Poornaghatam, a motif from the Amaravati Buddhist stupa, or the Poornakumbham, a vedic symbol. Both motifs essentially symbolise the bounty of nature, but choosing one over the other could upset deep-seated notions of identity. These sentiments are best left to individuals; we don’t need to use them to build brand strategies of States, some analysts caution.

By giving Amaravati a Buddhist accent, the government aims to accomplish two purposes: a) Attract investment from East Asian countries of China, Japan and Singapore; b) Develop a Buddhist pilgrim circuit

The ancient town of Amaravati incorporates elements from multiple cultures and eras - beginning from megalithic era to the British era.

It was the seat of the Vajrayana Buddhism at the turn of the Christian era.

Some planners have taken it upon themselves to stress the town’s Buddhist heritage. Some, however, warn that projecting one aspect of culture at the expense of other is fraught with risks.