Buddhist population down by 75 per cent in Karnataka

Karnataka, India -- The Dalai Lama is currently on a month-long visit to Karnataka, but a glance at census figures may have him worried.

The religion-wise enumeration in the 2011 census for Karnataka throws up a startling fact: the State, which had the second highest number of Buddhists in the country, has seen a staggering 75 per cent decline in the population.

This remains an oddity in a nation where the Buddhist population is growing by 0.7 per cent; while, neighbouring Maharashtra, which houses the largest number of Buddhists, has added nearly 6 lakh in number.

Arid districts of North Karnataka, which saw a “dramatic rise” of Buddhists in 90’s through conversion of Scheduled Castes, have now recorded the largest drops.

Bidar and Kalaburagi districts — where 2.75 lakh persons or 70 per cent of the state’s Buddhist population — now have just 48,000 self-professed followers.

“It truly is surprising. By the increasing number of programmes or congregations, it would seem like the population is rising… unfortunately, there is a larger number of ‘paper Buddhists’ who have declared otherwise in the census,” says Ananda Bante, general secretary, Maha Bodhi Society in Bengaluru.

The numerical fate of the religion remains intricately tied to the dissipating Dalit movement in these regions, says Vaijanath Suryavanshi, a Bidar-based Dalit leader. In the 90s, a strong social movement had seen a rise in those converting to Buddhism, an event coinciding with Bahujan Samaj Party securing its first South India assembly seat in Bidar in 1994. 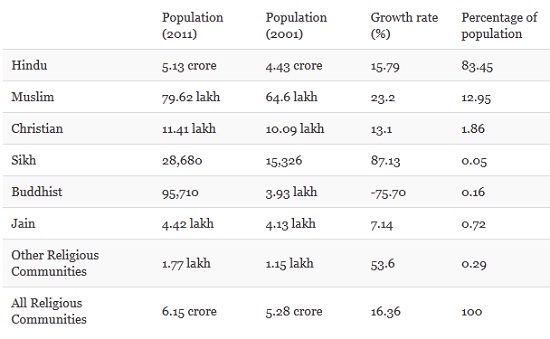 “By 2004, the movement was divided. The party faltered, and the oppressed castes were appropriated by all parties. When misinformation spread of neo-Buddhists being denied caste-reservation, there was no movement strong enough to counter this, unlike in Maharashtra,” he says.

Mavalli Shankar, State Secretary of Dalit Sangharsh Samiti, concurs, believing that “fear” created among the lower castes had persisted. “The movement continues to work for social justice. But, when it comes to following Dr. B.R. Ambedkar’s call for Buddhism, there is a deep schism. The fear of losing political space, or Hindu votes, is enough to scuttle the call,” he says.

The fear is spurred by rejections of caste certificates as the state — unlike Maharashtra — has not included neo-Buddists in their caste sheet, says Devendra Heggade, writer and Buddhist activist. “My own children have been denied caste certificates! This is akin to ensuring no more conversions,” he says.

“Enumerators talk to gram panchayat members rather with those in SC or ST colonies. Caste of the family is equated as Hinduism, rather than Buddhism,” he says.