On the anvil, trans-national Buddhist circuit from India to Nepal

The map of the Buddhist circuit as envisaged by the ministry comprises Bodh Gaya, Vaishali, Rajgir and Kushinagar in Bihar, Sarnath, and Shravasti in UP, along with Kapilavastu and Lumbini in Nepal where Buddha was born. 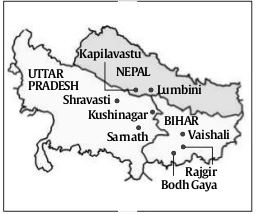 “It is surprising that while Buddhism originated in India and seven of the eight main Buddhist pilgrimage sites are in India, our country gets not even one per cent of Buddhist pilgrims in the world,” Tourism & Culture Minister Mahesh Sharma told The Indian Express. “Southeast Asian nations such as Indonesia and Thailand are getting a major chunk of Buddhism-related tourists while India lags behind, mostly due to a lack of infrastructure and awareness. We are going to offer world-class facilities and lure many of these tourists to India, which will also add tremendously to revenue and employment generation.”

The map of the Buddhist circuit as envisaged by the ministry comprises Bodh Gaya, Vaishali, Rajgir and Kushinagar in Bihar, Sarnath, and Shravasti in UP, along with Kapilavastu and Lumbini in Nepal where Buddha was born.

“Not just India and Nepal, many Buddhist sites are in Sri Lanka too,” said a senior ministry official who was involved in drafting the new tourism policy. “At the recent meeting of the SAARC working group, representatives from Pakistan and Afghanistan too expressed interest in promoting their Buddhist sites in collaboration with India. We will work with them and come up with a route map and promote these sites as a bundle.”

The ministry has already taken the Buddhist circuit under its Swadesh Darshan scheme, and released funds of Rs 100 crore. Meanwhile, talks are on with private players to come up with hotels around the sites and the World Bank to invest in infrastructure, the official said. A mega convention centre to accommodate 2,500 people has been approved in Bodh Gaya, so that corporate groups can hold conventions while touring the Buddhist circuit. Talks are also on with domestic tour operators to sell the entire circuit to groups of travellers, rather than just the India part.

The effort to promote Buddhist and Ramayana circuits comes ahead of polls in UP, home to many sites in these two circuits. Sources say that beyond state elections, the move is also aimed at countering China’s dominance as a centre of Buddhism though it originated in India.
TOP