Buddhists, Jains say they are not part of Hinduism; it’s a Sangh conspiracy, says rights activist

Gandhinagar, Gujerat (India) -- The two-day monsoon session of the Assembly can get a bit stormy over the Bill to amend the Gujarat Freedom of Religion Act, 2003. The sole clause incorporated in the Bill proposing to construe Jains and Buddhists as denominations of Hindu religion and therefore it’s no illegal to convert from one religion to the other, may trigger off a controversy. 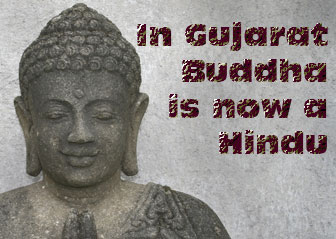 Minister of State for Home Amit Shah on Saturday said, “I can’t offer my comments before the amendment Bill is passed in the House. It will attract breach of privilege. I can only say that our government is going to place the Bill in the coming two-day Assembly session.”

Leader of the Opposition Arjun Modhvadia said, “All religions have already been defined in the Constitution of India. The Modi Government has no right to redefine religions. Buddhists and Jains believe they are not part of Hinduism, and they have constitutional rights to practise their own faiths,” he said.

In its statement of objects and reasons, the amendment Bill says Clause (B) of Section 2 of the Act defines the term convert. The definition does not elaborate the specific mention of a particular denomination of religion. It is considered that conversion among the inter-denominations of the same religion should be excluded from the operation of the Act.

Lawyer and human rights activist Girish Patel says historically, Buddhism had grown out of opposition of Vedic religion that is known as Hinduism. “If Buddhism is regarded as one of the denominations of Hinduism, then China, Japan, Singapore and a number of other countries would be Hindu nations. This attempt is part of a larger design of the Sangh Parivar.”

Meanwhile, TimesNow.tv reports that the Gujarat state assembly have officially passed the Freedom of Religion Bill, in the two-day monsoon session of state assembly that began on September 18, 2006.

The bill bans forced conversion from one religion to another.

The bill was already passed in 2003. This time, there is a clear cut classification.

Ironically, the state government has clubbed the Buddhist and the Jains into the category and will be now called Hindus.