BODH GAYA, India -- Tales of corruption, looting and religious rivalry are swirling around the spot where Buddha is said to have gained enlightenment in eastern India some 2,500 years ago, sullying one of Buddhism's holiest sites. 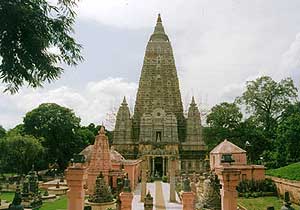 Buddhist scriptures describe it as the "Navel of the Earth," and 100,000 pilgrims and tourists visit every year, packing the town of Bodh Gaya in Bihar state and its Mahabodhi Temple.

An ancient pipal tree, Ficus religiosa or sacred fig, grows at the back of the temple, said to be a descendent of the one Buddha sat under for three days and nights in the sixth century BC, before finding the answers he sought under a full moon.

But with the tourists and pilgrims comes money, and with the money has come mounting charges of less than saintly behavior.

Priests and monks allege that thousands of dollars in temple donations have mysteriously vanished, that a thick branch of the ancient holy Bodhi tree was lopped off and sold in Thailand in 2006, and that ancient relics have disappeared.

Hindus also revere the site and it is a Hindu monk, Arup Brahmachari, who is leading a campaign to expose the wrongdoing.

"I am not fighting as a Hindu, I am fighting because I love God," he said. "Buddha was a son of God, and someone is misbehaving with his property."

Many Hindus accept Buddha as an incarnation of Vishnu.

The temple land has been owned by a nearby Hindu monastery for centuries, and the temple is managed by a committee where Hindus retain a majority over Buddhists.

But representatives of both religions stand accused.

Charges have been brought against the powerful former secretary of the Bodhgaya Temple Management Committee, a Hindu, as well as the committee's former public relations officer and the former Buddhist chief priest of the temple.

A police report obtained by Reuters accuses the three men of "nefarious activities" and asks for their private wealth to be investigated.

Witnesses questioned by police said the priest had ordered an employee to cut off "substantial parts" of the tree and take them to his home. The trio were also accused of selling off fallen leaves to pilgrims and pocketing the proceeds.

Former temple secretary Kalicharan Yadav denies the allegations, saying the branch was removed in 1978 when the tree was pruned, and said the charges against him were political, trumped up only after his party lost power in Bihar.

Its central stupa rising 187 feet above the ground where Siddhartha Gautama is said to have become the "Awakened One," the temple is thought to have been built 1,500 years ago and was declared a UNESCO World Heritage Site in 2002.

Inside, in front of a giant golden statue of Buddha, pilgrims from Japan, Sri Lanka, China, Thailand and the West kneel and chant. Outside, others collect fallen leaves from the giant tree and others growing in the temple courtyard.

Clad in white robes, the barefoot and bearded Brahmachari excitedly points out the spot where the branch was chopped off, as well as empty niches around the temple grounds where he says statuettes of Buddha stood until recently.

"They sent the branch to Thailand, and sold it for 6 crore (60 million) rupees ($1.5 million)," he said, adding he had been beaten up twice and had received several death threats since starting his campaign.

"Nobody is listening. I am fed up of writing letters."

But he is not alone in his anger, joined by Buddhist priests running many of the other temples and monasteries which have sprung up in Bodh Gaya.

Although its accounts are audited, the priests complain the temple does nothing to support local schools and hospitals, despite having a substantial income.

"Money is coming in, but where the money is going nobody knows," said Bhante Pragyadeep, treasurer of the Buddhist Monks Association of India.

District magistrate Jitendra Srivastava has been running the temple committee since the scandal surfaced and the last committee's term expired.

"All secretaries have been embroiled in controversy," he said. "It is very unfortunate."

Significant amounts of money had been spent "beautifying the temple and giving it world-class facilities," he said, and no allegations of corruption had surfaced since he took over.

While the charge of cutting a branch was now sub judice, allegations of deeper wrongdoing had not been substantiated.

"A lot of people say this but I have no credible evidence. It remains to be seen if these people have taken this money."

Meanwhile, many Buddhist priests say they, and not Hindus, should be running one of the holiest sites in their religion.

But magistrate Srivastava said that would be no guarantee of honesty in the future.

"A thief can be a Hindu or a Buddhist," he said. "A thief is a thief, he has no religion."