Patna, India -- Buddhist Priests Fear 'Hinduization' of Mahabodhi Temple. Photo by Anupam SinghThe president of the All India Bodh Gaya Mahabodhi Vichar Mukti Andolan Committee Bhadant Anand, at a press conference in Patna on Saturday, accused the state government of trying to 'Hinduize' the Mahabodhi Temple by setting up Hindu temples within the premises – a charge denied by the temple committee. 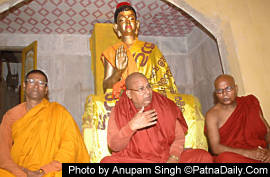 He also accused the government of failing to take proper care of the Mahabodhi Temple saying the Mahabodhi tree under which Lord Buddha is believed to have attained enlightenment over 2000 years ago was slowly dying and steps must be taken to ensure its roots are not weakened in the lack of water or natural fertilizer.
TOP