Bhubaneswar, India -- Tibetan spiritual leader the Dalai Lama addressed the people of Bhubaneswar on Thursday. The function was organised by the Utkal University of Culture in association with Hotel & Restaurant Association of Odisha. 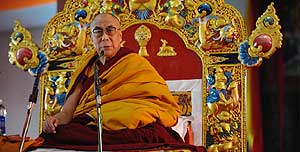 “Any unrealistic method brings disaster. The message of non-violence, love and compassion keeps our mind calmer. We must look objectively, our mind must be unbiased. An agitative mind can't see reality and objectivity. Buddhism is carrying these teachings,” observed the spiritual guru.

“Buddhism is more about human emotions. In the course of that exploration, it will become obvious that most disturbances are stimulated not by external causes but by such internal events as the arising of disturbing emotions. The best antidote to these sources of disruption will come about through enhancing our ability to handle these emotions ourselves. Eventually we need to develop an awareness that provides the ways and means to overcome negative, disturbing emotions ourselves,” added Dalai Lama.

“Now time comes to promote Buddhism and make effective work for which knowledge is essential. I believe that particularly in the case of the Buddha Dharma, which has been in existence for over 2500 years and which shares with the other religious traditions teachings such as compassion, kindness, and tolerance, and self-discipline has a special role to play in this modern time. This is so because unlike the other religious traditions, Buddhism propounds the unique concept of inter-dependence, which is close to modern science,” said Dalai Lama.

A brief presentation was made on Buddhist heritage and culture of Odisha and the state's tourism potential.

The Dalai Lama was in Odisha on a four day visit. Earlier during his stay in the state, he inaugurated a monastery, said to be South Asia 's biggest, at a Tibetan settlement at Chandragiri in the Gajapati district.