Dharamsala, India -- Tibetan spiritual leader the Dalai Lama has expressed sorrow over the death of Polish President Lech Kaczynski in an air crash in Russia last week. Kaczynski was an admirer of the Dalai Lama and had met him a number of times. 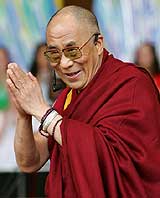 “In a letter to Polish Prime Minister Donald Tusk April 10, His Holiness the Dalai Lama offered his condolences to the people of Poland for the loss of President Kaczynski, and all the others who died in a tragic air crash,” according to a post on the official website of the Tibetan government-in-exile Monday.

“His Holiness recalled having been privileged to meet the president when he visited Poland and expressed his admiration for the late president’s dedication to the cause of freedom, democracy and human rights,” said the post.

The Dalai Lama, who is now touring Europe, was made an honorary citizen of Warsaw in July 2009.

In Poland, the Tibetan leader is already an honorary citizen of Wroclaw and has an honorary doctorate from the Jagiellonian University.

In December 2008, he attended ceremonies to mark the 25th anniversary of the award of Nobel Peace Prize to Polish labour leader Lech Walesa, who became the first president of Poland after the fall of communism in eastern Europe.