Leh, Ladakh (India) -- The Buddha stood by the Druk White Lotus School, an architectural milestone just 15 km from Leh, when a cloudburst caused devastation in the cold desert region of Jammu and Kashmir last week. While it did suffer damage, the school is already looking forward to being 'back on its feet'. 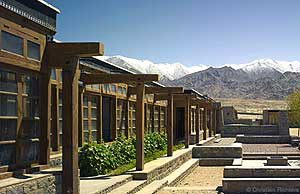 Popularly known as Rancho's school after it featured in the movie '3 Idiots', it was able to battle flash floods and mudslides thanks to its quake and flood resistant technology even as the Aug 6 cloudburst killed more than 165 people in and around Leh.

The school that received the British Council for School Environment Award for the 'most inspiring building globally' in 2009 shot to fame after it was used to shoot the climax for '3 Idiots'.

The actor is reportedly keen to help the school recover from the aftermath of damage.

On Tuesday, the actor posted on his Facebook, 'Very shocked and distressed to hear about the school we shot in Leh for '3 Idiots'. Trying to get in touch with the principal. I suppose the communications are down too.'

The actor found out through a journalist friend that 'there were no casualties in the school'. 'Just spoke with Mr.Prasad, the principal at the school in Leh. Big relief after speaking with him. (I) Am trying to go there,' Aamir wrote.

The school has 506 students. 'All the 200 children who lived as boarders in the school were safe,' a spokesperson for Phillip Cornwell, the first chair of the Britain-based Drukpa Trust, which runs the school, told IANS over telephone from London.

School principal Prasad Eledath has said cleanup and relief work has started with the help of the staff and he aims to 'put the school back on its feet in a week'.

Eledath said 'it was like starting all over again'. He aims to restart the school in a phased manner, with 'Class 8 commencing on Thursday, Classes 6 and 7 next week, and Classes 3-5 in one-two weeks. The small children will start at a later date, once it is safe for them to do so'.

The school that had switched off its solar turbines Tuesday switched it on Wednesday, sources said.

'The multi-award winning school was partially clogged by the mudslide that flowed through the eastern half of the school campus. Some of it seeped into the residential buildings and classrooms half way up the walls,' Cornwell's spokesperson said.

The winner of three international architecture awards for its eco-friendly design and sustainability projects, the White Lotus School has been designed by the avant garde global design firm Arup.

'While it is too early to assess the extent of the damage, initial inspection indicated only limited structural damage to the buildings. The Arup-designed buildings seem to have withstood a major test,' the spokesperson said.

Arup is known for ambitious designs that are disaster resistant. Founded in 1946, the group designed the Sydney Opera House and the Centre Pompidou in Paris.

The White Lotus School was conceived by the 12th spiritual leader of the Drukpa sect, Gyalwang Drukpa, and built by two Arup architects, Jonathan Rose and Duncan Woodburn.

Built in 2001, it is managed by the Druk Padma Karpo Education Society, a local Ladakh-based non-profit group and Drukpa Trust. The Trust, a conglomerate of international charities, is the financial arm of the Tibetan Buddhist Drukpa sect.

The award winning features of the school, the spokesperson said, 'were the ventilation improved pit latrines that did not need water, passive solar heating devices and trombe walls that trapped heat and released them slowly through narrow spaces, a gravity feed water system that pumped snow-melt water from a depth of 30 metres and anti-seismic wooden rods and steel support structures to withstand earthquakes'.

One residence courtyard, the junior courtyard and the administration courtyard were inundated by mud, he said.

'The staff and volunteers have managed to recover some files and equipment. The IT room has been rendered non-functional. The eastern boundary wall has caved in as well as the wall in front of the school, but the buildings to the west have escaped damage. The dining hall and kitchen are intact,' the spokesperson said.

The solar water pumps are working and water supply was not affected.

'On Saturday, the local people diverted a stream adjacent to the school as a temporary measure to deflect any future water or mud flows. But the school needs a permanent solution,' he said.