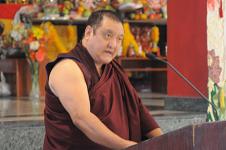 The Shamarpa lineage is the second oldest reincarnate lineage in Tibetan Buddhism. Shamar Rinpoche (Mipham Chokyi Lodro) is a lineage holder of the Karma Kagyu school of Tibetan Buddhism and the mind manifestation of Amitabha Buddha.

A month long festival opened in New Delhi with the traditional Buddhist chants and practices. The 14th Shamarpa - Shamar Rinpoche, the Red Hat Karmapa presided over the auspicious occasion.

Nearly 150 lamas and monks from Ladakh, Sikkim, Darjeeling, Nepal and Tibet gathered in the capital to mark the occasion and meet Shamar Rinpoche. Dressed in his traditional costume and Red Hat Shamar Rinpoche was lead to the prayer hall in the ceremonial practice by lamas.

The divine sound of chants, Gyalings, drums and cymbals charged the atmosphere and prayers were offered for safety of the country and the entire world.

Speaking on the occasion, Shamarpa said, 'We want all sentient beings to be safe and may the New Year spread spiritual prosperity among one and all. I pray for world peace and may patience dwell in every heart.' The constant chants and prayers filled the atmosphere with a strong positivistic verve.

The celebration will continue for one month till December 30, 2010 and the 900 year anniversary celebration in memory of the first Karmapa D?sum Khyenpa will be conducted in Bodhaya. This celebration will be lead by Kunzig Shamar Rinpoche, accompanied by many Rinpoches and monks. His Holiness 17th Karmapa Trinley Thaye Dorje, the spiritual head of Karma Kagyu tradition of Tibetan Bhuddism shall make a public appearance on the concluding day of the festival. Karmapa Living Buddhas belong to the oldest line of Tibetan reincarnations, stretching back to the 13th Century.

To shoulder a community responsibility Karmapa Charitable Trust was established by 16th Karmapa, Rigpe Dorje. Since then the Trust is working extensively in Sikkim for the education of underprivileged children and physically challenged people. Trust is the rightful administrator of Rumtek monastery in Sikkim. ?Our society needs more helping hands so that a better life can come to the underprivileged section. There is very little done so far and so much more is yet to be done,? says Shamar Rinpoche, the lineage-holder of the Karma Kagyu tradition and a board member of the Karmapa Charitable Trust.

About the Karma Kagyu Lineage

Karma Kagyu, or Kamtsang, is the largest lineage within the Kagyu school, one of the four major schools of Tibetan Buddhism. The spiritual head of the Karma Kagyu is the Gyalwa Karmapa. The Karma Kagyu was founded by the first Karmapa, Jetsun Dusum Khyenpa. It is headed by the Gyalwa Karmapa, a reincarnate lama (tulku). Followers believe that the Karmapa's appearance as the first historical consciously reincarnate teacher was predicted by the Buddha in the Samadhiraja Sutra. The Karma Kagyu school belongs to the Vajrayana branch of Mahayana Buddhism. It is a Triyana (all three turnings of the Wheel of the dharma) school (e.g., monks and nuns keep the vows of Vinaya while lay practitioners hold the Upasaka vows) and a Rime (non-sectarian) tradition.

The central teaching of the Karma Kagyu is the doctrine of Mahamudra, also known as the "Great Seal". This doctrine focuses on four principal stages of meditative practice.

About the 14th Shamarpa

Shamar Rinpoche ?Mipham Chokyi Lodro? is the 14th Shamarpa or the Red Hat Karmapa. The Shamarpa lineage is the second-oldest reincarnate lineage in Tibetan Buddhism. Shamar Rinpoche is a lineage holder of the Karma Kagyu school of Tibetan Buddhism and the mind manifestation of Amitabha Buddha. Born in 1952, he had spent many years studying in India with Buddhist scholars. After that from 1980 onwards he began to travel and teach in various Buddhist centers throughout Asia and the West and in 1982 went to U.C. Berkeley to study English for 10 months. In 1996 he started to organize the Bodhi Path Buddhist centers, a network of centers based on a non-sectarian approach to Buddhism. Shamar Rinpoche is also the author of two books- Creating a Transparent Democracy: a New Model and The Path to Awakening.