DHARAMSHALA, India -- The spiritual leader of the Russian Republic of Kalmykia described the cultural and religious ties with Tibetans a top priority, which he said will automatically give impetus to the political aspect of the Tibetan issue. 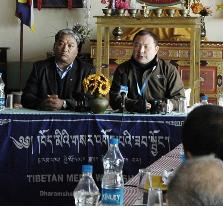 << Telo Rinpoche (R) addressing a group of Tibetan journalists at Gangchen Kyishong, the seat of the Central Tibetan Administration, in Dharamsala, India, on 2 December 2010. Also seen in the picture is Mr Tashi, (L) Additional Secretary of the Department of Information and International Relations/TibetNet Photo

Telo Rinpoche, revered as Shadjin Lama (Head Lama) of Kalmykia, was born in the US and pursued his Buddhist studies in Drepung Gomang Monastery in south India.

Addressing a group of Tibetan journalists in Dharamsala yesterday, Telo Rinpoche spoke about the millenia-old cultural and religious ties between Tibet and Mongolia, the ensuing decline caused by Communist rule in Russia and the invasion of Tibet by the People's Republic of China, and the recent revival of relations with the disintegration of USSR.

Telo Rinpoche said since the fall of Communism in Russia in 1991, our ties with Tibetans has been growing strongly as streams of monks and students are send to study Buddhism and Tibetan medicine in monasteries and educational institutions of the Tibetan refugee community.

The relationship would continue to flourish as long as the Tibetan refugees accept our students, he added.

Speaking in impeccable Tibetan, Telo Rinpoche said the cultural and spiritual ties with Tibetans necessitate our support for Tibet under moral obligation. By speaking in pure Tibetan language, you are making contribution to the political cause of Tibet, he said.

Telo Rinpoche was asked about his efforts to work out His Holiness the Dalai Lama's visit to Russia.

Telo Rinpoche said the Russian government is constrained by its economic and political relations with China.  “We consider the importance of co-operation between Russia and China as it brings benefit to the Russian people,” he added.

He underlined that the Tibetan people should have a long-term vision to preserve their language, culture and ideology for the next hundred years or more, and not merely focus only on human rights issues.

He encouraged Tibetans not to lose hope and determination, saying His Holiness the Dalai Lama has the support of the international community. If you people keep up hope and put shoulder to the wheel, we would be always right behind you, he said.

He said the around 27 journalists from Russia are in Dharamsala to cover His Holiness the Dalai Lama's three-day discourse on Buddhist teachings to over one thousand pilgrims from Russia.

The journalists have given positive coverage of their press conference with His Holiness the Dalai Lama and their visits to Tibetan cultural, educational, monastic and humanitarian institutions in Dharamsala. We thank the Department of Information & International Relations of the Central Tibetan Administration for co-ordinating the visit, Telo Rinpoche said.