All Buddha's Teachings Must be Translated in Tibetan: Dalai Lama

Dharamshala, India -- All teachings of lord Buddha and Buddhist texts, which were not available in Tibetan, should be translated into Tibetan language, said His Holiness the Dalai Lama, Tibet's political and spiritual leader while delivering the valedictory address at the four day Tengyur conference which held on Tuesday at the Buddhist holy city of Varanasi in India. 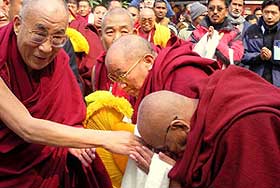 The four-day 'Tenggyur Translation Conference: In the tradition of the 17 Pandits of Nalanda', is being jointly organised by the Central University of Tibetan Studies and American Institute of Buddhist Studies at Columbia University. "We must translate those sutras that are written in Pali and are not available in Tibetan," said His Holiness the Dalai Lama. The Buddhist leader said a number of sutras had already been translated into Tibetan by the Tibetan and Indian scholars. The texts were edited and enriched further by the next generation of scholars, but there were many other sutras that must also be translated.

Other distinguished guest including Prime Minister of Tibetan government-in-exile Prof. Samdhong Rinpoche, vice-chancellor of the Central University of Tibetan Studies Geshe Ngwang Samten and Robert Thurman from Columbia University also expressed their views on the occasion.

Addressing the inaugural function, Prof. Samdhong Rinpoche said that Nalanda and Tibet had a strong association in the ancient period. A number of Tibetan and Chinese scholars had been allotted special rooms at Nalanda for studying and teaching, he said.

Delivering the welcome address, vice-chancellor of the Central University of Tibetan Studies, Geshe Nagwang Samten said that the scholars of Nalanda and Tibet have enriched the Buddhist philosophy by translating the text from Sanskrit to Tibetan language.

Pobert Thurman, an American professor of Buddhist studies at Columbia University, highlighted the teachings of Buddha. He said that in today's world, many problems like global warming are emerging due to the greed of man. The solution to these problems is not possible through science only, he added.

According to the organisers, the Tengyur or 'shastra section' contains Tibetan translation of many important Sanskrit works from Indian monastic universities like Nalanda and Vikramshila. When translated into Tibetan, these works in turn inspired Tibet's own enlightenment renaissance. Accordingly, many great Tibetan masters including His Holiness the Dalai Lama have termed the Buddhist teachings in these Tengyur texts as of very high value.

The Indian works preserved meticulously in the Tibetan translations represent the lost Indian heritage consisting of works not only related to Buddhist philosophy but also on a variety of ancient Indian sciences and arts like ayurveda, jyotish, grammar, lexicography, prosody, iconography and sculpture. Translating these works from Tibetan into the modern language is a commendable attempt to regain this heritage for the benefit of future generations.