West Kameng, India -- Young Buddhist monks are not averse to owning a television set or a motorcycle and would even love going around wearing jeans and sweatshirts, unlike in the past. 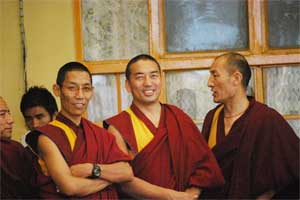 Early morning at around 4:30 am, the voices of the monks echo in the Thubchog Gatseling Monastery in West Kameng district of Arunachal Pradesh, as they begin offering prayers which they believe, would take them to the "right path and enlighten their lives"

Jambey Dorjee, a young monk in the monastery, says he would not mind having a television set and a motorcycle, if he could. "As for the dress, I'm satisfied with my robes," he says.

His confederate Lobsang Tsering, however, says he would like to wear jeans, jackets and sweaters to stay warm.

At the age of 20, Tenzing Sherab, a saffron-robed youth with a shaven head has already completed nine years at the monastery in Bomdila, the district headquarters, which borders the Tibetan region of China.

The Bomdila monastery is among several Buddhist places of learning that dot the region, including the monastery in Tawang, about 40 kms northwest of Bomdila.

Asked about the monastic life, Sherab says, "I'm going the right way by following the path of Buddha. I think about enlightenment. We don't want to be attached to the wheel of life."

In the monastery the young monks follow a rigorous schedule. They wake up at 4:00 am and after bathing meditate and pray until breakfast at 7:30 am.

They study the Buddhist Scripture from 2:00 PM till 3:30 pm and then break for half an hour.

Other religious studies and activities keep them busy till they go to bed at around 11:00 pm.

Asked about other religions, most young monks say they have heard about Christianity, Hinduism and Islam, but know nothing about these.

For a chubby, 12-year-old Lopsang Genses, the reason for becoming a monk was just because he wanted to be one.

Tenzing Lobsang was forced to become a monk by his parents but is happy with his life now.

"But I'm now quite happy here. My ambition is to be a good monk and nothing else," he said.