Chennai, India -- Sri Lanka on Tuesday expressed concern over the attack on the Sri Lanka Maha Bodhi Centre in Chennai late on Monday night in which three of its citizens were injured. 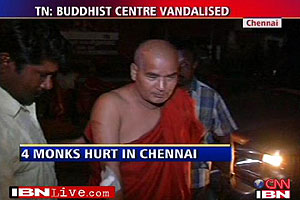 While no one has taken responsibility for the attack, it was not immediately clear whether the incident was retaliation against the alleged killing of two Indian fishermen by the Sri Lankan navy off the Tamil Nadu coast in the past two weeks.

The Sri Lankan navy had denied involvement in both killings.

An unidentified group consisting of 10-15 persons carried out an attack on the Sri Lanka Maha Bodhi Centre in Egmore, Chennai around 9pm.

During this incident, three Buddhist monks, including a chancellor of Lankan university, and Nepalese citizen residing at the Maha Bodhi Centre at that time, sustained minor injuries, while the property of the Centre was also damaged.

"What I have been told that 10-15 people came. An auto driver called me...I live in the neighbourhood...I came here immediately. By then the monks were taken to the hospital. I do not know what exactly happened here," said Kapil Alexander, a local resident.

The injured were immediately rushed to the Mercury Hospital in Egmore where they were treated and subsequently discharged.

The Sri Lankan ministry of external affairs has taken up this matter up with the Indian Government through the Indian High Commission in Colombo.

"The Indian High Commission has assured the ministry of external affairs that a full investigation would be carried out into this incident and had informed that two suspects have already been taken into custody in this connection," the Lankan government said in a statement.

"The High Commission also assured the ministry that necessary action would be taken to ensure the safety and welfare of the Maha Bodhi Centre and other Sri Lankan institutions and establishments in the State of Tamil Nadu," the statement said.

Sri Lanka's high commissioner in New Delhi, Prasad Kariyawasam has left for Chennai following this incident and is due to meet with the chief secretary of Tamil Nadu and other senior officials of the Tamil Nadu state government with deputy high commissioner in Chennai, V Krishnamoorthy, to express concern over the incident and seek their assistance to ensure the safety and welfare of the Maha Bodhi Centre and other Sri Lankan institutions and establishments in the State of Tamil Nadu, especially in Chennai.