DHARMSALA, India -- Indian authorities are investigating the source of large amounts of money found in a northern Indian monastery that is the headquarters of Tibetan Buddhism's third most important leader, police said Saturday. 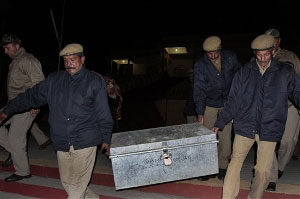 << In this Friday, Jan. 28, 2011 photo, policemen carry a metal box containing money from the Gyuto monastery, the home of Ugyen Thinley Dorje, the 17th Karmapa, in Dharmsala, India. Indian authorities have begun investigation into nearly $777,000 that had been found in the northern Indian monastery, the headquarters of Buddhism's third most important Tibetan leader, D.S. Minhas, director general of police in the northern Indian state of Himachal Pradesh said Saturday.

Police and revenue officials are tracking about $777,000 found in the Gyuto monastery, the home of Ugyen Thinley Dorje, the 17th Karmapa, said D.S. Minhas, director general of police in the northern Indian state of Himachal Pradesh.

The money was in nearly two dozen foreign currencies, including a large amount of Chinese yuan, Minhas told The Associated Press.

"The amount of money we found was so large that we will certainly look into every angle of what could be the source, and what was the purpose," Minhas said.

Indian media have been carrying reports that the Karmapa could be a Chinese agent sent to India to become a leader of exiled Tibetan Buddhists who have made their home in the northern Indian town of Dharmsala.

The Karmapa has been living in Dharmsala since his arrival from Tibet in 2000.

Minhas said police questioned the Karmapa on Friday and would talk to him again about the source of the funds. It was not immediately known what the Buddhist leader said to police.

His office denied in a statement Saturday that he had any links with Beijing.

It said the Chinese currency found by the authorities had been donated by followers in Tibet.

"All our dealings across the world are honest and completely transparent — anything else would be contrary to the Buddhist principles that we live by," the statement said.

Dharmsala has been the headquarters of the self-declared Tibetan government-in-exile since the Dalai Lama, the 75-year-old Tibetan spiritual leader, fled the Himalayan region in 1959.

China's government reviles the Dalai Lama, accusing him of pushing for independence for Tibet and sowing trouble there. A boy named by the Dalai Lama as the second-highest Tibetan spiritual leader in 1995 disappeared shortly afterward and China selected another boy.

Police raided the Gyuto monastery on Thursday and arrested a monk on suspicion of trying to illegally buy land in the region.

The raid followed the arrest of two Indians a day earlier who were found carrying 10 million rupees ($22,200) in cash, said Santosh Patial, a superintendent of police.

On questioning, the two said they had received the money from the monk, an Indian national, to buy a plot of land in Himachal Pradesh where Dharmsala is located.