New York, USA -- The gray skies above Manhattan could not dampen spirits below as Buddhist monks and nuns from all corners of the globe assembled before the United Nations midtown headquarters on Monday, their robes a brilliant patchwork of saffron and burgundy against the drab urban backdrop. 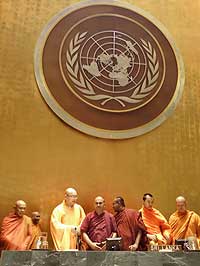 Early risers marveled at the sight of this colorful and serene procession heading up first Avenue and across 47th Street to Dag Hammarskjold Park, where throngs awaited to give alms, commencing the day’s program in honor of the 2600th Anniversary of The Buddha’s Enlightenment.

The United Nations in 2000 officially recognized Vesak, held on the full moon day each May to mark the birth, death and enlightenment of Gautama Buddha. This year, the Permanent Mission of Sri Lanka to the U. N. had the honor of coordinating the commemorative events for this special Sambuddhathva Jayanthi celebration and The International Day of Vesak.

Following the alms giving and a quick breakfast, 198 monks representing Sri Lanka, India, Pakistan, Bangladesh, Myanmar, Nepal, Cambodia, Thailand, Vietnam, Laos, the Republic of Korea, Philippines and Japan, convened in the majestic General Assembly hall. Here they blessed the room, chanting pirith—a first at the U.N.–and listened to the opening remarks of chairmen Dr. Palitha Kohona, Sri Lanka’s Permanent Representative to the U.N., who welcomed them along with the attending dignitaries, missions, members of the tri-state Buddhist community and general public.

“It is appropriate that the enlightenment of Gautama the Buddha 2600 years ago, a teacher who preached non-violence, tolerance, understanding and self realization, should be celebrated by the United Nations,” he said. “This organization was created on the smoldering embers of global war and the resulting death, destruction and massive displacement, to maintain international peace and security, to achieve international cooperation in solving international problems and to develop friendly relations among nations based on mutual respect. Against this background, the Buddha’s message remains ever relevant”.

To his right, Secretary General Ban Ki Moon, who mentioned that his own mother was Buddhist, echoed these thoughts saying, “The teachings of the Buddha may be twenty six centuries old but they are as relevant as ever today.” In addition, Ambassador Hasan Kleib of Indonesia, representing the UNGA president and 10 permanent representatives of participating missions addressed this full house returning again and again to an underlying theme of peace, tolerance and compassion–some of Buddhism’s central tenets. They also expressed their gratitude to the Mission of Sri Lanka for its supreme efforts in making the days’ events possible.

Buddhist clergymen The Khamba Lama of the Dashichoiling Monastery of Mongolia and The Venerable Dr. Ashin Nyanissara, a very senior scholar from Myanmar, joined the diplomatic speakers. The Honorable Wimal Weerawanse, the Sri Lankan Minister for Housing, also spoke on behalf of the President of Sri Lanka. 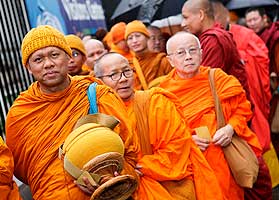 Following lunch, the afternoon session convened in the General Assembly Hall featuring an interfaith dialogue also chaired by Dr. Palitha Kohona. The underlying theme of peace and non-violence and Buddhism’s impact on the history, art, and culture of the vast Asian continent was central to these presentations. Speakers included the Rabbi Arthur Schneier, who echoed a very Buddhist sentiment when he said, “Hatred cannot cease by hatred but only love.” He was joined by the eminent Hindu priest, Swami Viditatmananda; Professor John Knitter, a Christian academic from Columbia University; and Dr John Guy, a senior curator from the Metropolitan Museum of NY, who gave a PowerPoint presentation on Buddhist art.

Sri Lanka was represented by three eminent voices, Buddhist scholar and writer, Dr Ananda Guruge; Professor Sudharshan Seneviratne, a visiting scholar at Swarthmore College’s Department of Religion, who called Buddhism a “doctrine of the intellect;” and senior monk The Venerable Bhante Henepola Gunaratane. “The peace that Buddhism talks about is that which is cultivated in the heart,” said the latter, speaking in a hall where international diplomacy is brokered. He added, “Buddha’s message of unconditional love and unconditional peace is not negotiated,” to rousing applause.

The day’s formal events culminated with an exhibition of photographs and artifacts from Buddhist countries at the Buddhist Heritage Exhibition, which was officially opened by the Honourable Wimal Weerawansa at the entrance to the GA hall.  Later, in accordance with tradition, an impressive buffet of international dishes was served to the participants in the UN lobby. Evocative of the dansalas in Sri Lanka, hundreds lined up to be fed, capping off this historic and auspicious occasion.