Kandy, Sri Lanka -- India's High Commissioner in Sri Lanka Ashok K. Kantha on Saturday unveiled a 16 feet high idol of Lord Buddha in the Sarnath style from the Gupta Period, at the entrance of the International Buddhist Museum complex in Sri Dalada Maligawa in the central hill capital Kandy. 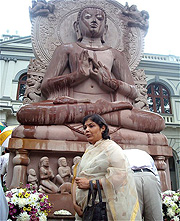 << The installation of the Idol commemorates 2600th year of Enlightenment of Lord Buddha.

Indian and Sri Lankan officials including Governor of Central Province Tikiri Kobbekaduwa, Diyawadana Nilame (Custodian) of the Dalada Maligawa Nilanga dela Bandara, Chief Minister of Central Province Sarath Ekanayake participated in the unveiling amid the observances by the Most Venerable Mahanayake Thero of Asgiriya and by Most Venerable Anunayake Thero of Malwatte.

The Sarnath Buddha Idol is an exquisite sculpture and a replica of the famous original 5th Century Gupta Period Idol from Sarnath, where Buddha preached his first sermon after attaining Enlightenment. The Idol in the Dharmachakra pravartana mudra (turning the wheel of law) and its pedestal have been specially carved in India out of a single piece of beige-colored Chunar sandstone by master craftsmen.

The Idol is a gift from the people of India to the people of Sri Lanka with active support and cooperation from the Diyawadana Nilame and other officials from the Sri Dalada Maligawa, and Director General, Department of Archaeology, Government of Sri Lanka.
Speaking at the occasion, Most Venerable Mahanayake Thero of Asgiriya and Most Venerable AnunayakeThero of Malwatte highlighted the arrival of Buddhism to Sri Lanka from India and emphasized that cultural and people-to-people linkage between India and Sri Lanka had enriched the relationship between the two countries and laid down a solid foundation for continuing friendship and cultural exchanges.

High Commissioner Kantha, speaking at the occasion, said the messages of love and brotherhood, of peace, goodwill and social equality preached by Lord Buddha 2,600 years ago were still relevant as the world struggles through unprecedented traumatic events.

The High Commissioner underlined that recognizing the shared cultural and civilizational links provided the bedrock of bilateral relations, India and Sri Lanka agreed in the Joint Declaration issued during the State Visit of Sri Lanka President to India in June 2010.

During the visit, the two countries have agreed to commemorate 2600th year of Sambuddhatva Jayanthi through joint activities, Kantha said.

Among the activities India undertook to commemorate the Sambuddhatva Jayanthi are the International Buddhist Conference organized by the Indian Council for Cultural relations (ICCR) on the theme "Cultural Interface between India and Sri Lanka based on Buddhist History, Art, Literature and Philosophy" in March and the recital "Nirvana-the Life of Gautam Budha" by ICCR sponsored Odissi Dance troupe along with a photographic exhibition "Buddhism in India" in May.

Kantha said the Indian Prime Minister had agreed to the request made by President Rajapaksa to organize an exposition of the Kapilavastu relics in Sri Lanka, the modalities for which are being worked out.

Indian Railways will be launching a special Buddhist train "Damba Diwa Vandana" from Chennai catering to Sri Lankan pilgrims in November this year. The train will touch more than a dozen Buddhist centers in India, including Bodhgaya, Sarnath, Kapilavastu, Sanchi and Kushi Nagar, High Commissioner announced.

Kantha underlined that Gratis visas are issued to the groups of Sri Lankan Buddhist pilgrims on the recommendation of Ministry of Buddhasasana and the resumption of ferry service after a gap of three decades and start of Damba Diwa Vandana will further increase the people to people connectivity and cement the old civilization linkages between India and Sri Lanka.

High Commissioner expressed confidence that the idol will be an eternal symbol of common heritage and bond of friendship and goodwill between the peoples of two countries.