Is the Folk-Buddhism currently practiced in Sri Lanka a major shift from the Canonical Buddhism of the Sutras?

Colombo, Sri Lanka -- At its heart, the Canonical Buddhism of the Sutras endeavors the samsaric wayfarer to uplift their spiritual condition through knowledge of the Noble Truths enunciated by our compassionate teacher, the Buddha. 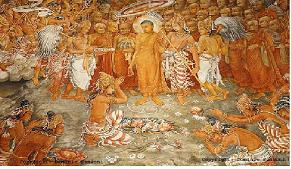 This task is quintessentially individual and cannot be short-circuited via transfering the goodness of others in the way Abrahamic faiths suggest, such as notions of atonement and saving grace.

The Mahayanist heresy – which strongly influenced religious practice in Sri Lanka from about the 7th centuray AD – introduced into popular Buddhism the notion of merit transfer (pin anumodan kireema) which made moral worth a computable ‘algebraic sum’ of credits and losses in a kind of karmic bank account.

More disturbingly, karmic merit is not assessed as the issue of the ‘good’ or the ‘dutiful’ but is strongly attached to sacerdotal theatrics (dana and puja) or forms of fetish-worship (the worship of the such things as historic trees and osseous relics).

What is stated above are generalities. Let us look afresh at the folk-Buddhism as currently practiced in Sri Lanka. The core message is as follows: the attainment of Nirvanic Bliss through a systematic treading of the Arya Magga or path of purification is for a narrow elite of the morally and spiritually gifted.

For the masses however, this is of marginal interest. The chief aim of the majority is not about esoteric transcendence leading to nirvanic bliss, but the betterment of prevailing existence in this world or the next. The monkish advice then, is to do the needful in this life that would ensure a better state of things in the life to come. As such, a labourer can do what is karmically appropriate so that he will be reborn (perhaps) as a lord and supervisor in the next. Notice that in this strange mutation of authentic Buddhist practice, moral upliftment is set aside in favour of a formulaic Buddhism that sets its sights on practical strategies of how to have a better rebirth through simple acts of submission and reverence.

The aim of moral acquisition and spiritual virtues leading to transcendence is replaced with a grossly mundane agenda of sacerdotal acts and submissions. Thus the Sangha is transformed into an organization that advices laymen on how to ‘accumulate merit’ (pin ras kireema) through dana and pujas with their own aim of spiritual enlightenment pushed aside in favour of a lucrative advisory role in lay affairs.

The Sangha – originally a band of renunciants pursuing a solitary path of spiritual discovery in an esoteric domain – acquires a new (and much favoured) role as advisors to the lay population on how to manage affair efficaciously in this life so that things would be much better in the next, The also preside over rituals that purportedly transfer merit to the deceased – now elsewhere but happy to receive restorative karmic energies from their dear ones. The Sangha metamorphosises into high priests and officiants presiding over healing rituals in much the same way as the brahmanic soothsayers of an earler age.

It must be said that this ‘New Buddhism’ is actually very old. One has only to read a medieval text in Sinhala such as the Pujavaliya to realise that Kings, Rulers and the Buddhist Elect of ancient Lanka practiced a vulgar parody of Buddhism they supposedly professed in their public acts. The Veneration of Trees,, the adoration and adornment of Stupas, the magic and majesty of relics and the lavish and public giving of alms constituted the sum and substance of their religiosity.

Above all, the compelling need to react prudently to the hegemonism of an increasingly powerful Sangha have made religon a ‘public activity’ driven by the ambitions of the elite to maximize the socio-cultural impact of their supposedly orthodoxy. Needless to say, this metamorphosis of the original message - of spiritual reformation, into a creed centered around grand rituals involving kings, high priests and the powerful of the land is a sad and astonishing denouement to a once great spiritual movement.

This anomaly of great public shows and sacerdotal mumbo-jumbo ousting the quest for inner-transcendence makes nonsense of an original message that abhors such misleading exhibitionism.

That this popular or folk-Buddhism is on the high road to spiritual degeneracy is made evident by the fact that its most ardent supporters are among the most fervent believers of deep ecumenism or inter-faith solidarity, that sees all religions as tokens of a Universal Divine Order that enconpasses all that is true and good.

In keeping with this belief in an overarching divinity, the ‘Buddhist’ leaders of our country pray in Temples, Churches, Kovils , Mosques etc with great ease. Our Buddhist clergy sit easily alongside their conferers of other faiths and chant religio-magical mantras while their counterparts invoke God’s blessings.

It is unlikely that the flourishing folk-religion we see in contemporary Sri Lanka will be ousted by a mass reassertion of the original and authentic beliefs that constitute true Buddhism. Unlike the Semitic faiths – where evangelism and mass conversions are the rule – Buddhism spreads ‘top-down’ in that the ‘initiators’ and inspirational figures are the Kings and Nobles of the land.

The the purity of this faith thus depends on the genuiness of its  practioners – not on the fickle spiritual needs of the opportunistic masses of common humanity. Where leadership wavers in its true belief and goes the way of the masses in worshiping all gods, where the Sangha vulgarizes and adapts the faith they supposedly uphold to meet the needs of harassed supplicants for quick spiritual relief, there cannot be anything but a caricature of the true religion.