Diplomatic double standards of Sri Lanka and the west

Colombo, Sri Lanka -- While some Sri Lankans have shed copious tears over the assassination of Mummar Gaddafi, there is not even a whimper of protest on reports of a recent wave of self immolation of many Tibetans in desperation against what has been described as the hardening of Chinese repression. 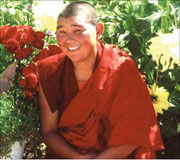 Tibetan exile groups have reported a 34-year old Tibetan nun Palden Choetso set herself on fire on Thursday. She was from the Takar Geden Choeling nunnery. Before her death, she had called for the long life of Tibet’s spiritual leader, the Dalai Lama and the freedom of Tibet. She is said to be the eleventh Tibetan who had self immolated in the recent wave of protests that commenced in March this year.
Last week, a Tibetan monk too set himself on fire in protest against what Tibetans describe as China’s tight grip on religious practices in Tibet.

It is somewhat ironic that Sri Lankan leaders who have accepted granting Buddhism the ‘foremost place’ in their constitution, thereby undertaking to protect the interests of Buddhism, should ignore the self immolation by Tibetan monks and nuns in desperation against absence of religious freedom.

The government of China would undoubtedly deny charges of such repression of Tibetan Buddhists as it has done consistently since 1951 but our concern is about the total disregard by Sri Lankan Buddhists and their leaders regarding what is happening in Tibet.
Surely a statement of the Government expressing sympathy about the plight of the Buddhist clergy in Tibet is as deserving as that about Gadaffi’s murder? It is a double tragedy because the government comprises a party composed of Buddhist monks and supposedly Buddhist leaders.

In recent times Sri Lankan commentators, editorialists and political leaders have not minced words about double standards of Western leaders on human rights particularly regarding allegations on Sri Lanka while they turn a blind eye to their violations in other regions in the world such as in Libya, Iraq, Afghanistan and Pakistan. Certainly the West is guilty of this charge but aren’t we too equally guilty of such dual standards?

Some would argue that it would be sheer madness to be critical of Chinese policies in Tibet, having cultivated friendship with China since the 50s with the signing of the Rubber-Rice Pact. That was at a time when the US strongly objected to this newly independent country establishing trade relations with ‘Red China.’ But the first UNP government, despite their pro Western tilt did not shrink back in going ahead with the deal. They did so in national interest but any pro Tibetan statements in the current context of the economic dependence on China would be tantamount to hara-kiri.

It could be said that the human rights policies of Western governments too are directed in their own national interests and it appears to be utterly hypocritical in the context of the high moral grounds they take against human rights violations by Third World countries.
However, the fact that a stridently Buddhist country such as ours cannot invite the spiritual leader of the Tibetans, the Dalai Lama as an honoured guest because of our economic interests, too is utter hypocrisy.

Sri Lanka has other constraints too in sympathising with the Tibetan cause. The demand on China to make Tibet an autonomous region has parallels here with the demand for a separate state. And the Sri Lankan government it appears will not consider even regional devolution of power. Besides, China’s solid defence on the Tibetan issue has been that Tibet  has been an integral part of China at times de jure and at time de facto since the Yuan Dynasty of the Mongols ruled China  and that the Tibetan issue is an internal affairs of China. This is a similar stance of the Rajapakse government in answering calls for granting a separate state, autonomy or devolution.

No tears for Burma

Sri Lanka’s lack of sympathy to the plight of Buddhists outside our shores was well exhibited when the Burmese junta cracked down with utmost severity on the rebellion of Buddhist monks to over throw the junta. Skulls of monks and their sympathizers were cracked, their pagodas raided and thousands of them thrown into jail.

Successive Lankan governments were unable to express sympathy with that lone frail woman Aung Suu Kyi who led the freedom struggle while being in exile for over a decade. Even Sri Lanka commentators whose hearts bleed to those like Gaddaffi were not concerned about the massacre of Burmese Buddhists. This column however focused quite frequently on the plight of the Burmese Buddhists but of course was totally ignored by the Chandrika and Rajapaksa regimes.

High morality with dual standards Burmese civilian government comprising former army generals who are now in national dress however have acquiesced to international sanctions and isolation and appears to be willing for change as seen in relaxing the restrictions placed on Aung San Suu Kyi.

The Rajapakse government unfortunately extended its cooperation to the military thugs that have ruled Burma for over half century. When Sri Lankan political leaders climb on to high moral peaks and lambaste  Western leaders and governments on double standards they fail to realise their own hypocrisy.