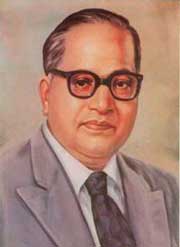 As a leading Buddhist country in the world, the Buddhists of this country should seriously consider requesting the Government of Sri Lanka to issue a commemorative postage stamp in honour of Dr. B.R. Ambedkar, for the great work he has done for his people and the cause of Buddhism in India.

There are 250 Million Dalits in India which is virtually 1/4th of the Indian Population.

Sri Lanka should befriend these people.

Buddhism can cement ties between Indian Dalits and Sri Lanka.

Uttar Pradesh is the most populous State in India.

Sri Lanka should invite Mayawati to visit Sri Lanka and in turn seek the strengthening of ties between Uttar Pradesh and Sri Lanka, The Buddhist World must give her recognition outside India.

The example of Ambedkar embracing Buddhism should be given the widest publicity in the North and East ( as Gamini Gunawardena has suggested) to motivate the so called low caste Tamils in these areas and the Hill Country of Sri Lanka to pursue a similar path.

Buddhism teaches equality. This was Dr. Ambedkar's message to his fellow Dalits.

Indian Dalits who are Buddhists (in the absence of Dr. Ambedkar) may well spread that message among Tamils in Sri Lanka who feel persecuted and oppressed by members of the higher profile Tamil castes.