Colombo, Sri Lanka -- Who is to be held responsible if an aged member of the Sangha, discharged from a government hospital, seeks shelter in the nearby bus stand for several days not knowing where to turn to? Is it the Buddhist laymen of the country, or the disciples of the aged monk? All should share the disgrace, I believe. 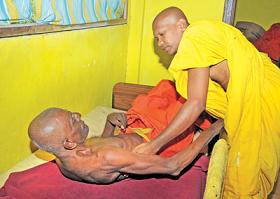 But is it of any use to point fingers at others when what should be done is to rise to the occasion and reach out to the needy? This is the very thought that would have crossed the mind of Ven.Maderawane Amilasiri Thera of the Sri Bodhirukkharamaya, Wellawa, Polgahawela when his eyes accidentally fell on the aged monk who was lying in a critical condition at a bus stand in the Kurunegala town on January 20, 2004.

“As I spoke to the Thera I understood that he had been lying there for several days. He was from Galewela. With great difficulty he had managed to come to the bus stand and his feeble physical condition had made him stay there until I found him. His disciples had dropped him to the hospital, but had not returned to take him back. I decided to take him to our temple and look after him.” Amilasiri Thera recollected the incident which inspired him to establish the Amilasiri Centre for the Aged Monks which is located in the temple premises.

The very next day the Thera visited the Kurunegala hospital and told the staff that he is ready to accept aged monks after their discharge if there is nobody to accept them.

Five monks were sent to the centre on the same day. Since that day Amilasiri Thera is engaged in the noble mission of looking after the sick monks who have no where to turn to at their old age.

The Amilasiri Centre for the Aged Monks which is located in the premises of Sri Bodhirukkharamaya, Wellawa, Polgahhawela, today provides shelter to 35 aged Bhikkhus who come from different parts of the country. Though the drive to the temple, which is situated on an elevated land is not easy, the place is surrounded by lush greenery and the serene environment is ideal for the aged monks. However the difficult drive sometimes makes the lives of these ailing monks tedious as it is not so easy for vehicles to reach the place in an emergency to rush them to the hospital.

As children we have heard the story of Puthigaththa Tissa Thera who was nursed by the Buddha when he was lying in his Kuti in a critical condition at the Jethavanarama. “He who attends to the sick, attends to me” said the Buddha emphasising the importance of looking after the sick. Amilasiri Thera, a disciple of the Buddha in the true sense of the word, is fully devoted to these sick monks who seek his assistance throughout the day.

“Three monks have to be fed and some are bedridden and they need full time attention.” It is with great compassion and sympathy that Amilasiri Thera nurses the sick monks who stay in the four wards which are at the temple premises. There are twenty three Sameneras (Novice Monks) in the temple and they help the Thera for preparing Dahna (alms) for the monks and collect firewood cadjan leaves, and coconuts from the temple backyard. The way the Sameneras help the noble mission of Amilasiri Thera is praiseworthy. Amidst all this work and financial difficulties, these Sameneras continue with their Pirivena education as well.

During the early days of its establishment the Thera had to go on alms rounds along with the other monks to collect food for these ailing monks. “The support of the villagers was immense.”said the Thera. But as the number of aged monks increased and also because the type of food required by each monk differ due to their medical conditions, now food is generally prepared in the temple premises by Amilasiri Thera with the support of the Samaneras. “We also get Dhanas on certain days. What we mostly get as donations are dry rations.” No vehicles are owned by the temple to take the sick monks to the hospital. “There is only one trishaw owned by a village boy who rises to the occasion at a considerable rate and helps us out.”

The Thera’s extraordinary compassion towards humanity was appreciated at the Viru Jana Weera award ceremony in June, 2011 where he was awarded with Viru Jana Weera award for donating a kidney to a needy patient by risking his own life. The donation was made to a 22- year old newly married Catholic girl in 2005.

“In two earlier instances I was planning to donate a kidney. But both patients died. My name was registered in the Kandy Hospital donators’ list, so they came looking for me when this girl was in need of a kidney.’

Today she is a mother of two. When asked whether he has any contacts with that family he said that he had asked them not to visit him and that his sole expectation was to give someone else a chance to live. He does not want anything beyond that.

Amilasiri Thera was born as the fifth child in a family of eight. In 1988 he entered the Order at the age of fifteen under Malambe Madurasiri Nayake Thera of the Homagama , Dampe Sri Bodhiwardhanarama. His father Peter Weeresinghe of Embilipitiya, Modarawana passed away three months back at the age of 83. As a grateful son he never forgot to spare a few hours from his busy life to visit his sick father. His mother Misilin Nona is seventy three years old.

Since its establishment in 2004, 40 theras have gone back to their respective temples after curing themselves completely. Twenty six Theras have succumbed to old age and died at the centre.

None of the disciples of Hanguranketha Pungnasara Thera who is taking treatment at the Centre has any contact with him. His only aide is Amilasiri Thera. Pungnasara Thera has been staying here for one year. Handapangoda Sandasiri Thera has been staying at the centre for the past one and half years and is taking treatment for a leg ailment. “Very rarely do the Dayakes call me to inquire about my health.” He said. The stories of the other 33 Theras including the Panawela Gnana Keerthi Thera , Wathuragama Siri Sumana Thera, and Kirama Ananda Thera are more or less the same.

However the most tragic is the story of Thrikunamale Nandasara Thera who was dumped at the Kurunegala hospital by his own driver on whom he had immense trust. According to Amilasiri Thera the driver had been in the habit of handling the Thera’s bank pass books and had access to his money. Once the thera got critically ill he had admitted the thera to the Kurunegala Hospital. “Then he sold the Thera’s car and took his belongings and fled the area.” Today Amilasiri Thera is the sole guardian of Thrikunamale Nandasara Thera. He is completely bed-ridden requiring constant attention.

According to Amilasiri Thera the long- stay in the wards have made most of these theras mentally weak. “Not all are bed ridden. There are monks who can walk around and get their things done. What they want are separate rooms so that they are more free and happy.”

“The free land adjacent to the temple premises is owned by somebody else. Unfortunately the well is also situated there.” If this piece of land could be bought by the temple that will be of immense benefit to these sick monks. “ That land could be used to build a hall where these monks can stay more freely. Confining themselves to beds forever make them mentally weak” the Thera said. In a culture where we had an extended family system which had all the facilities to look after the aged , ‘elders home’ was a remote concept. It is certainly not a concept we should promote. However the truth is so bitter that if these places do not exist most of the elders have to undergo immense suffering at their old age.

The same plight awaits the aged monks if their Dayakes (patrons) and disciples shy stay away from their responsibility. People with golden hearts cannot wait until those who are responsible reach to help their ‘loved ones.’, what they can do is to strengthen the hands of noble people who are ready to accept those who are in distress with open arms for the sheer compassion for humanity.