Worshippers are being told to give fewer sweet treats to monks amid fears that their diet is too rich.

Colombo, Sri Lanka -- Sri Lankans are being urged to cut down on offerings of sweets and cakes to the country's Buddhist monks after it was found that half the nation's holy men are at risk of poor health due to a diet rich in sugar and oil. 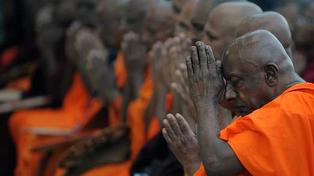 Devotees provide the monks with their food - and book up to a year in advance for the chance to cook for them.

The food is made with great care and is often extremely rich, but this has led to the alarming statistic that 50% of the island's 40,000 monks are at risk of diabetes, compared to the national average of 10%.

The venerated monks are also at higher risk of heart disease, the health ministry says.

Officials have now come up with new guidelines to encourage devotees to donate low-sugar, healthier food for the monks' diet instead.

The average daily intake of 12 teaspoons of sugar should be reduced to a maximum of eight, according to the new guidelines, while salt should also be sharply reduced.

Alms should not include more than one dish containing cooking oil, the ministry added.

"Diabetes and other non-communicable diseases among Buddhist monks can be reduced if the faithful follow the new diet guidelines," it said.

Buddhism is the majority religion amongst Sri Lanka's 20 million people, who believe offering meals, cakes, biscuits and sweets to monks will bring them good karma in this life as well as in the next.

Buddhists who believe in reincarnation also offer food to monks in an attempt to transfer good luck to departed loved ones.

But the ministry says the offerings should consist of long-grain rice, three vegetables and two types of fruit rather than cakes and sweet things.