Dr B.R. Ambedkar to be monumentalized in Sri Lanka

Colombo, Sri Lanka -- On March 1 at the Maha Bodhi Society premises in Maradana Colombo, a discussion was held towards creating new channels of Lanka-Indo relations initiated by Buddhist activists from both here and India who have opened a dialogue as private citizens, hoping to strengthen bonds of amity between the two countries on the basis of shared Buddhist heritage. 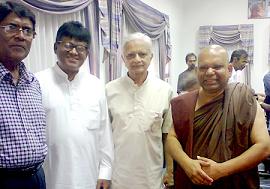 The initiative was the culmination of a successful goodwill tour of Sri Lanka, recently, by a delegation of Indian Buddhists, consisted of both clergy and laity. The eight member Indian Buddhist delegation led by Ven. Dr. Bhadant Rahula Bodhi Maha Thera met President Mahinda Rajapaksa at the President’s House in Kandy on February 22, which speaks soundly of the government’s recognition of the group’s endeavour to build bonds on the basis of a common Buddhist heritage.

The importance of cultural symbolism for diplomacy and bond building has been long understood by people who reach out to form intercultural harmony. The symbols of Buddhist affinities between India and Sri Lanka in the more modern context was brought out in the course of the presentation discoursed by Ven Dr Bhadant Rahula Bodhi Maha Thera on the lines of modern figures who are seen as symbols of Buddhist revivalism. One of Sri Lanka’s foremost national figures of Buddhist revivalism during the last stages of British colonialism, Anagarika Dharmapala holds a place of esteem amongst Indian Buddhists according to the venerable Thera. And the quintessential symbol of Buddhist revivalism in India is none other than the erudite Dr B.R. Ambedkar. who is revered as the father of the Indian constitution.

What was propositioned by Ven Dr Bhadant Rahula Bodhi Maha Thera is the installation of a life-size statue of Dr Ambedkar as a public monument to mark symbolic bond between the Buddhists of India and Sri Lanka. The thera emphasised that India has thousands of monuments commemorating Dr. Ambedkar and that there are monuments dedicated to Anagarika Dharmapala as well, although Sri Lanka has not yet recognised Dr. Ambedkar with a public monument.  And the bronze needed for this monument will be gifted by the Buddhists in India stated the Thera.

Speaking on the schema of Buddhist iconography that represents Buddhism through Indian symbols of State, the Thera pointed out that the State emblem of India has the lion of the Buddhist Emperor Asoka, as well as a version of the Dharma Chakra on the Indian flag. “The Brahmin people in India were angry with Dr. Ambedkar for making Hindus to become Buddhists. He converted more than half a million Hindus to Buddhism in a single stroke in 1956. Never has it been recorded of such a feat in any country where such a great number of people entered the Buddhist fraternity,” said the Thera.

“Sri Lankans and Indian Buddhists are brothers.” Emphasised the Thera stressing that the nearly 70 million strong Indian Buddhist populace will hold Sri Lanka in great affection if the hero of the Buddhist revivalism in India is recognised with a public monument being raised on Lankan soil. If the project is given recognition by the Rajapaksa government, the Indian Buddhist lobby will ensure the participation of either the President or Premier of India at the unveiling ceremony declared the Thera.

Ven. Rahula Bodhi Thera of India stressed that India’s Buddhists are very much for a united Sri Lanka and outlined what he believes to be identifiable results of the future installation of an ‘Ambedkar monument’ in Sri Lanka. A tidal rise in the numbers of Indian arrivals to Sri Lanka was cited as an initial response. The Indian government’s appreciation of Sri Lanka will grow for honouring one of India’s greatest sons noted the Thera, stating further he believes millions of Indians who are ardent followers of Dr. Ambedkar and people who admire him around the world will view Sri Lanka favourably. As stated by the Thera Dr. Ambedkar’s vision for India was that of Emperor Asoka’s, which was to create a Buddhist country.

This initiative which is presently being spearheaded by private citizens from both India and Sri Lanka to strengthen bonds between the two countries is now coming to fruition after Senaka Weeraratna, a Sri Lankan Buddhist activist advocated, early last year, the idea for a commemorative postage stamp to be issued by Sri Lankan postal authorities to honour Dr. Ambedkar, which gained attention amongst likeminded people. Time will surely show how great a flame may grow from a spark of thoughtfulness to build bridges across nations and cultures in pursuance of ideals of international amity.