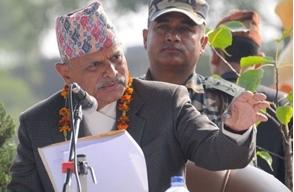 President Dr Yadav handed over the lamp to Buddhist religious preacher Hejen of Dosunsa Monastery based in South Korea at the Presidential House in Sheetal Niwas.

A 80-member delegation of Buddhist monks headed by Hejen had arrived in Nepal from the monastery on the management of Nepal South Korea Lumbini Peace Lamp Expedition Citizen Main Function Committee.

The committee had brought the peace lamp to Kathmandu from Lumbini on Thursday. The lamp festival is set to take place in Korea to mark the Buddha Jayanti by illuminating lamps taken from Lumbini, the birth place of Buddha.

On the occasion, the President has expressed his hope that the lamp to be taken to Korea from Lumbini would impart a positive message to maintain human welfare and peace in the global context, said the committee coordinator Kapil Lama.