Colombo, Sri Lanka -- Sri Lanka with a Theravada Buddhist civilization that protected and fostered Buddhism has much to introspect. With over 70% of the population being Buddhists it is a national shame that we continue to forget the very basic teachings of the Buddha whose message to us was to treat non – human sentient beings with compassion and loving – kindness, as though they were no different to humans with feelings and pain. 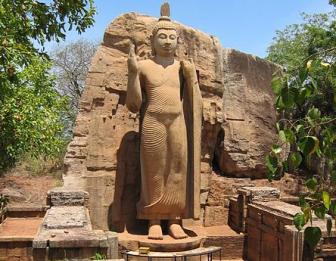 If animals share emotions no different to ours, is it not a huge embarrassment that in this reputed Buddhist country our elected leaders fall shy of enacting the Animal Welfare Bill tabled in Parliament in 2010 as a Private Member’s Bill and which has its genesis in the Animal Welfare Bill drafted and sanctioned by the Law Commission in 2006?
We cannot be Buddhists by name

There are two mistakes one can make along the road to truth.

NOT GOING ALL THE WAY and NOT STARTING – Buddha

What sort of legislative reform is the Ministry of Justice supposed to be undertaking when the primary statute in Sri Lanka governing the protection and welfare of animals to this day is an antiquated statute enacted during the British colonial era in 1907 i.e. Prevention of Cruelty to Animals Ordinance, where the maximum punishment for a heinous crime to an animal is a mere Rs. 100 (less than one US Dollar)?.

If the International probe on Sri Lanka’s human rights record is to be extended to cover the legislative protection given to animals in Sri Lanka and lack of interest shown by our lawmakers in improving the standard of care and treatment afforded to other living creatures, we will have nowhere to turn. It is shameful that we have stooped to this level of intolerance. We stand almost last in the queue of nations very close in this respect to several Islamic nations like Sudan, Iraq, Somalia and, Saudi Arabia, that by deliberate choice refuse to provide legislative protection to animals.

As a pre-dominant Buddhist nation is the Sri Lankan Parliament beholden to protect animals by enacting the Animal Welfare Bill already sanctioned and gathering dust since 2006? Can Sri Lanka’s Parliamentarians morally defend their silence?

The need to enact the Animal Welfare Bill is further strengthened by the international Petition gathering momentum the world over by the Dharma Voices for Animals launched in the USA.