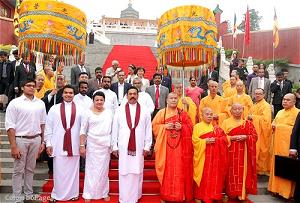 The chief incumbent most venerable Chang Zang and fellow monks welcomed the President, the First Lady and the delegation, and invoked blessings.

The temple, which was established 1,200 years ago, has become a center for Buddhist pilgrims because of the Buddha tooth relic that it houses. The only other recognized tooth relic of the Buddha is located in the Sri Dalada Maligawa (Sacred Temple of the Tooth Relic) in Sri Lanka. The tooth relic at the Lingguang Temple had first been taken to what is now Pakistan after the passing of the Buddha before it was brought to China.

President Rajapaksa donated a gold-plated Buddha statue to the temple when he visited China in 2007.