Colombo, Sri Lanka -- Thai Prime Minister Ms. Shinawatra is due to visit Buddhist Sri Lanka during the month of Wesak. The bond that Sri Lanka and former Siam (Thailand) share needs to go beyond diplomatic niceties. 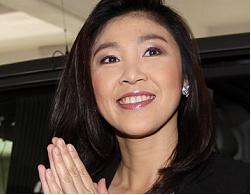 The people of present and future need to know the exact nature of what ties Buddhist nations together. In addition to seriously considering forming a League of Buddhist Nations it is suggested that a film be produced in co-partnership about the “Fascinating Journey from Sri Lanka to Siam” based on the narration of Wilbagedera who wrote the original narration of his journey to the Thai capital of Ayuthiya and the magnificent welcome accorded to the Sri Lankan delegation by the Thai King.

Let all those preparing to welcome the Thai PM remember that she arrives not to talk about multiculturalism but to mark the special Buddhist bond that exists between Buddhists and Buddhist nations. Therefore, it is essential that the agenda is solely on Buddhism and those involved in discussions are capable of giving genuine voice to Buddhists this translated means that all those mouthing opposing views should be left out.

It was in 1752 that Ven. Upali Thera of Siam was assigned by the Siamese monarch to visit Sri Lanka to restore the Buddhist Sangha Order in Sri Lanka. The backdrop to this was the request made by King Keerthi Sri Rajasinghe who sent a convoy of monks initiated by Ven. Weliwita Saranankara to Siam.

The Siam Nikaya is located around the city of Kandy and is named so because of its origins in Thailand. The two main divisions of the Siyam Nikaya are the Malwatta and Asgiriya. Together both Nikayas have over 6000 temples and close to 20,000 Buddhist monks. It is this bond that brings the Thai PM to Sri Lanka bringing a special message from Thailand.

The hospitality shown by Siam continues unabated to this day and Sri Lanka acknowledges with pride the warmth with which a fellow Theravada nation continues to uphold traditions.

The Sri Lankan delegation headed by Wilbagedera was a journey that took 3 months passing Cambodia to reach Siam in 1750. The detailed and picturesque account of the respect and honor given to the Sri Lankan 60 member delegation by the Siamese King is enchanting to any reader.

We are told that a retinue of 32 boats formed in procession to carry the Sri Lankan envoys with music in accompaniment. Outdoing even the diplomatic chivalry of the present the protocol procedures followed at the Royal Thai palace cannot be left to a book for selected reading only. Ayuththa was 60km inland and described as a “glorious capital” and far more practical than the present floodprone capital of Bangkok.

The narrative of Wilbagedera and others being taken on horse-drawn carriages to the Palace, given a Guard of Honor consisting of Regiments with thousands of troops in attendance needs to be visually made available to the entire world in film jointly sponsored by both nations and filmed in both Sri Lanka and Thailand.

It would be a great opportunity to forge and strengthen people to people contact between Thailand and Sri Lanka to enhance cultures between the two nations.

Everything that the Sri Lankan envoys saw from white elephants in the Thai place, the precious stones, gold, figures of lions and elephants, the golden Lion throne on which the King sat like a God Sakra radiating the place from the gemstones, being served on gold and silver trays, visiting holy temples is something that should definitely not escape the attention of the present and future generation of Buddhists.

It was after this visit that Sri Lanka saw a revitalization of Buddhism and within 3 years 3000 samaneras had joined the Sasana.

Sri Lanka also has the honour of initiating the discovery of Footprint of Buddha in Siam in the year 1628 A.D.

Thus the meticulous account kept by Wilbegedera, Sri Lanka’s envoy to Siam from the time the delegation departed from Trincomalee port aboard the Dutch ship Weltryg on 1st August 1750 to sail back to Sri Lanka on 30th May 1753 on board the VOC ship Oost Kapelle after 2 ½ years needs to be put into a film a joint effort by the Governments of both Sri Lanka and Thailand.

The heroes of the Buddhist world need to now gain the publicity it is denied by the English press, in order to bring these to the open a League of Buddhist nations would ensure that forgotten histories are revitalized and forgotten heroes are once more remembered. Asia’s heroes and Asia’s fetes are exclusive and awesome too.

A film on Wilbegedera’s journey to Siam is certainly one agenda item that cannot be omitted. This will provide the basis to form better ties not only amongst the clergy but amongst lay Buddhists as well throughout the Buddhist world.

Asgiriya and Malwatte chapters must back the initiative to form a League of Buddhist nations as well as the film that would link the people of Sri Lanka and Thailand closer.