Colombo, Sri Lanka -- Convocation of the International Buddhist Education Institute was held at Pallekele under the patronage of President Mahinda Rajapaksa on Saturday. 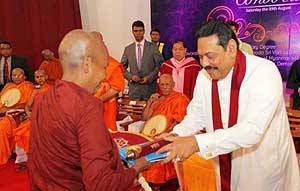 This is the 2nd convocation of the International Buddhist Education Institute in Sri Lanka which is connected to the Maha Chulalankaro University in Thailand. About 352 clergy and laymen graduates were conferred with degrees at this ceremony.

The President also offered credentials of "Saddhamma Jothika Dhaja" honorary title given by the Myanmar government to the Anu Nayaka of the Malwatta Chapter Venerable Dr. Niyangoda Vijithasiri Thero at this ceremony. A book compiled by Venerable Buddharakkhitha Thero of Uganda was offered to the President at this event.