Colombo, Sri Lanka -- Masoeyin monastery monk U Wirathu has announced he is linking up with hardline monks in Sri Lanka, alleging that the Buddhist religion is under threat from Islamic jihadists. 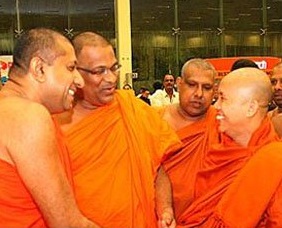 The Mandalay-based monk Wirathu, addressing a convention in Colombo of the Bodu Bala Sena (BBS) or Buddhist Force, said they would work together to protect their common religion.

The BBS has been accused of instigating hate attacks against minority Muslims and Christians in mainly Buddhist Sri Lanka.

"To protect and defend the threatened Buddhist the world over, my 969 movement will join hands with the BBS," the Myanmar monk said at a 5,000-seat stadium packed with monks and their lay supporters.

He said Muslim extremists had tried to scuttle his visit to Sri Lanka, which shares close cultural and religious links with Myanmar.

"I am thankful to the President (Mahinda Rajapakse) for granting me a visa in spite of attempts by Muslim extremists to prevent my visit," he said.

"Buddhists are facing a serious threat today from jihadist groups," the monk said, without giving details. "The patience of Buddhists is seen as a weakness.

"Buddhist temples have been destroyed. There is a jihad against Buddhist monks. Media organisations along with world powers are using technology to carry out a campaign against Buddhists," he added.

BBS has been linked to stepped-up attacks against minority Muslims and Christians in the past two years.

The group has denied involvement, but some of their members have been seen on videos posted on social media websites while engaged in violence against minority religious places as well as businesses.

The government has denied allegations that it provided tacit support to the BBS.

Sri Lanka suffered its worst religious violence in decades this June when riots broke out in the resorts of Aluthgama and Beruwala, leaving four people dead.

The BBS has been accused of instigating the attacks, a charge it denies.

The Muslim Council of Sri Lanka had warned the authorities that allowing Wirathu to visit "would pose a serious threat to peace in our beloved motherland".

BBS leader, Buddhist monk Galagodaatte Gnanasara, has been compared to Wirathu, who has been accused of ratcheting up tensions between Buddhists and Muslims in his own country.

Gnanasara has described both of them as "peaceful monks with no blood on our hands".

In Myanmar clashes between Buddhists and Muslims have left at least 250 people dead and tens of thousands displaced since fighting broke out in the western state of Rakhine in 2012.