Colombo, Sri Lanka -- The Dalada Maligawa in the ancient hill capital of Kandy where the Tooth Relic of the Buddha is enshrined, is held in high esteem around the Buddhist world and millions of pilgrims visit the temple each year. It is considered as the pinnacle of Sinhalese Buddhism. Yet, in recent years, their management has been openly criticized by many leading Buddhist monks and lay leaders in Sri Lanka. 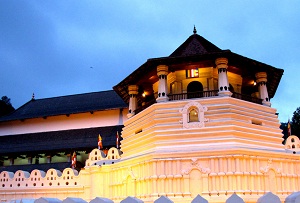 The Temple of the Tooth, or Dalada Maligawa, is administered by the chief custodian of the temple, known as Diyawadana Nilame. He has to be a Sinhalese Buddhist and is elected for a period of 10 years, during which time he is responsible for the conducting of all daily rituals of the temple.

During his tenure, he is the sole custodian of all movable and immovable properties belonging to the temple and is responsible for their safety as well as development.He is also charged with the duty of appointing officers necessary for the administration of the temple and the performance of its rituals.One of the biggest responsibilities of a Diyawadana Nilame is to organise the annual Kandy Esala Perahera, a grand spectacle of a procession of traditional dancers, drummers and temple dignatories that is world-renowned.

Diyawadana Nilame is chosen by a vote of some 396 persons that include the chief prelates of both Asgiriya and Malwattachapters, chief incumbents of certain temples and their custodians, Basnayake Nilames of the devales (temples dedicated to Hindu dieties incorporated into Sri Lankan Buddhism) and divisional secretaries of those selected areas around Kandy (the last Sinhalese kingdom). Election is possible by a simple majority.The election is held according to the Buddhist Temporalities Act of 1931 and is conducted by the Commissioner of Buddhist Affairs.

Since the 2005 elections for the post, when Sri Lanka’s leading political parties got heavily involved in the election process backing their own favoured candidates, the election process has attracted much criticism. Many grassroots Buddhist leaders, including monks, have questioned the transparency of the temple’s financial dealings, and criticized the institution for not using its financial resources to empower grassroots Buddhist communities that have become vulnerable to proselytism by other religions.

With the government poised to amend the 1931 Buddhist Temporalities Act, a conflict has arisen within the Buddhist clergy regarding the need to liberalise the way the Diyawada Nilame is elected.

Those from outside the Kandy area have expressed their resentment at the attempts by the Asgiriya and Malwatta chapters to continue their stranglehold on the election process.

A proposal by the grassroots oriented Ramayana and Amarapura Nikayas (monk sects) to include 8 voting members from their ranks to make the voting process more balanced and nationally oriented has been opposed by the chief prelates of the two Kandy temples,though this proposal has been endorsed by a number of senior monks belonging to the same Asgiriya and Malwatta chapters but heading temples outside of Kandy.

The Asgiriya and Malwatte temples belong to the Siam Nikaya of the Sri Lankan clergy that had its origins in the Kandyan aristocracy. But, today it has 8 chapters countrywide, and the 6 chapters that are outside Kandy are supporting the proposal to have the 8 nationwide representation. They have joined the 22 chapters of the Amarapura and the Ramayana Nikayas in proposing the reforms.

The senior monks who are calling for the reform of the electoral process argue that the Dalada Maligawa is no more the property of the Kandyan aristocracy and it is the common heritage of the Sri Lankan people. Thus, the election of the Diyawadana Nilame must reflect that fact. The monks have been further upset by a proposal by the two Kandy chapters which would increase their strength in the voting process by a further 40 votes.

“The sacred Tooth Relic is the most important treasure of the Sri Lankan people,” argues Venerable OmareKassapaAnunayakaThera, general secretary of the Siam NikayaRohana chapter. “It is not the personal property of anyone or any group, it is a common sacred treasure”.

In this respect, he questions the fairness of restricting the voting process for the appointment of the Diyawadana Nilame to only Kandyans. He says that only the Asgiriya and Malwatta chapters have opposed the proposal to include 8 voting monks from outside Kandy in the election process.

“If they were willing to include the 8 votes we proposed in addition to the 40 votes they have proposed, it would have contributed enormously to the unity of Buddhists in Sri Lanka,” argues Ven. Kassapa. “This is an elitist attitude that should be seen for what it is”.

Venerable Brakmanawatte Sivali Thera of the Amarapura Sangha Sabha (monks’ assembly)  says that 3 months ago they  submitted proposals to the Buddha Sasana Minister Wijayadasa Rajapakse. “He agreed to our proposals (but) after agreeing the minister without consultation issued a gazette notification asking the parliament to approve the Asgiriya-Malwatta proposal”.

Representing the Amarapura Nikaya Venerable Pallekande Ratanasara Thera says “when we can create unity and harmony among the monks and Buddhist laity, Malwatte and Asgiriya (chapters) are trying to reinforce its power and we reject this attempt and condemn it…..they need to accept that we have a democratic system and we invite the two chapters to act democratically in accordance with the dhamma”.

Venerable Omalphe Sobitha Mahathera, chief of the southern province of Ramayana Nikayalaments that minister Rajapakse has acted unethically to approve the Malwatta-Asgiriya proposals ignoring the proposals of all other sangha of Sri Lanka.

“Minister is working in opposition to democratic principles,” argues Ven Sobitha Mahathera. “We are against the minister working sneakily with Asgiriyaand Malwatta (temples) to pass this through (parliament).

We haverequested a meeting withthe President (Sirisena) to discuss this … we want to present to him that without our proposals it should not be passed by parliament”.

* This is a special Lotus News feature in association with Sasuna, the newspaper of the Sri Lanka Ramayana MahaNikaya.