Sri Lanka: So you want to take out Buddhism?

Colombo, Sri Lanka -- The ‘enlightened’ people entrusted with the grave task of recommending changes to the constitution have sought to turn Sri Lanka into an official secular state. Although the Final Report of the Consultation Task Force on Reconciliation Mechanisms (CTF) doesn’t mention it, this particular recommendation clearly seeks to do away with Article 9 of the Constitution. 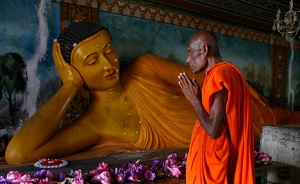 Article 9 reads thus:
The Republic of Sri Lanka shall give to Buddhism the foremost place and accordingly it shall be the duty of the State to protect and foster the Buddha Sasana, while assuring to all religions the rights granted by Articles 10 and 14(1)(e).

Articles 10 and 14(1)(e) are as follows:
10. Every person is entitled to freedom of thought, conscience and religion, including the freedom to have or to adopt a religion or belief of his choice.

14. (1) (e) the freedom, either by himself or in association with others, and either in public or in private, to manifest his religion or belief in worship, observance, practice and teaching.
This recommendation should not surprise anyone. The worthies on this committee are without exception either advocates of secularism and have on occasion been critical of Article 9 (and even openly been anti-Buddhist as judged by crass extrapolation of extreme Buddhist groups to cover the entire community and strange silence on the excesses of other religious groups) or are tainted by association with organizations that by and large do the same.

This report claims legitimacy from both appointment and by claiming to have given ear to voices that cut across all categories, religious and otherwise.

A report put together by the Committee on Constitutional Reform, headed by Lal Wijenayake, released last year, in contrast appear to have actually listened to people and recorded their representations faithfully, despite the problematic nature of the committee’s composition. The CTF report, in contrast, is weak, slanted and quite in contrast to the reconciliation intent of the mandate, a recipe to deliver its very opposite. However, given what has to be understood as real intent, the recommendation is what was always predictable.

This is how it is worded:
The CTF strongly recommends that meaningful steps should be taken through consultation with all stakeholders, towards a secular State and with equal respect accorded to the multiple religions practiced in the country. The logic of Article 9 draws from the clause related to Buddhism in the Kandyan Convention, the document that ceded the Kandyan Kingdom (to which the ‘land of the war-like Sinhalas’ - as described by the Dravidian marauder Raja Raja Chola I - or ‘Sinhale’ had shrunk by that time) to the British: ‘

The religion of Buddhoo, professed by the chiefs and inhabitants of these provinces is declared inviolable and its rites and ministers and places of worship are to be maintained and protected’. The British treated that as well as other protective clauses with utmost disdain (to put it gently) thereafter. If the recovery of the nation from the invader was to make any sense, then reinstating those abrogated clauses was logical. Hence Article 9, it can be argued, also considering the notion of ‘compensation’ for all the violence unleashed on Buddhists and Buddhist places of religious significance, and the burning and looting of Buddhist texts. We could throw in the formal and informal advantages conferred on non-Buddhists, especially Christians, in all spheres, especially education and obtaining employment.

Someone might say, ‘but people, communities and geographies are always in flux - changing times and scenarios call for changed articles of faith’. Correct. If that’s the case, then we have to legislate for the moment, having duly dumped history in the waste-paper basked of constitution-making. Out would go all talk of traditional/historical homelands (myth-lades though they may be) and with it calls for devolution. Factored in would be the dispersed nature of the Tamil community (close to 50% live outside the so-called ‘traditional/historical homelands’). Interestingly, that dumping is not called for by those who want to legislate for the here and now.

But what is this here and now? Is it the number-erased, percentages-ignored thing described as multi-ethnic and multi-religious? We are not talking of a population equally divided along lines of ethnic identity and religious persuasion. We are not talking of a neatly ethnically enclaved geography. So, in essence, Buddhists are asked to concede demographic edge in the interest of ‘a more enlightened’ political arrangement. Perhaps Buddhists are being asked, in the name of the philosophy they subscribe to, to reflect on the

Buddha Vacana, the notions of impermanence, the virtues of giving
(dana) and equanimity (upekkha) and so on; essentially boiling down to ‘magnanimity’ and the celebration of shared humanity.

Let’s go with secularism. If secularism is what is sought and if Buddhists are being asked to waive demographic advantage in view of ‘enlightenment’ and ‘reconciliation’, if reconciliation can never be a clap with a single hand, and if secularism is citizen-focused in ways that keep religion strictly separate from state, we would have to consider alterations that are not limited to doing away with Article 9.

Let’s begin with the simple things (things, please note that even the ‘enlightened’ West would not consider). Holidays. Religious holidays. Communal holidays. No Poya holidays. No extra holiday for Vesak. No   aluth avurudda on April 13/14. No Easter. No Christmas. No Ramadan. No Thaipongal, no Mahasivarathri, no Idul Fitr and no Idul Adha. No Deepavli or Milad-un-Nabi. And Sunday, a day of religious significance for Christians will no longer be a holiday. Instead, let the work day be truncated by one and a half hours, Sunday through Friday. Saturday, a religion-neutral days will be a holiday. And yes, no half-days or short-leave for Friday prayers. If employees want to be religious by all means, but on their time, not that of the organization that pays their salaries.

Let’s take it further. Not only will religion be taken out of the curriculum there won’t be morning prayers and there will no longer be schools based on religious faith. No Buddhist schools, Muslim schools, Hindu schools, Catholic schools or schools run by or framed by other Christian religious organizations or faiths respectively. The state cannot help in any manner whatsoever any private institution that has any association with any religious faith.

Let’s get more serious. Let this secular Sri Lanka of ‘equal citizens’ (never mind the inequalities that capitalism generate and depends on) be a land where there is one law: an  eka-ratak, eka-neethiyak kind of entity.  No marriages under ‘Kandyan Law’. It will no longer be possible to refer to Thesavalamai law in property-related litigation. No Sharia law. No ‘Muslim marriages’. No Talaq. No multiple wives.

Come to think of it, if we want to be truly secular, then we need to revisit Roman-Dutch Law as well, since the man considered to be the founder of this system of jurisprudence, Hugo de Groot, was a Christian apologist.

The CTF has been quite cute in all this. The CTF hasn’t gone into these important areas of secularism simply because it wants non-Buddhists to have religious privileges. When they interject the phrase ‘towards a secular state’, they deliberately advocate ‘a start’ and the only ‘start’ that anyone has talked about so far in this business of secularizing Sri Lanka is doing away with Article 9.  That’s cute, ladies and gentlemen.