Colombo, Sri Lanka -- Sri Lanka's top Buddhist priests have jointly appealed to the government not to proceed with its plan to write a new constitution for the country or even amend the existing constitution. 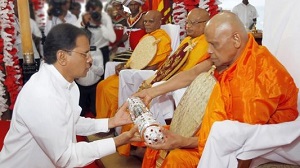 Called the 'Mahanayakes' (Chief Incumbents) of the three main Buddhist Orders ( Nikayas) the High Priests met on Tuesday and unanimously decided that there is no need for a new Constitution or even an amendment to the existing constitution.

However, they added that, if necessary, only the election system may be amended.

The Mahanayakes who belong to the Malwatte, Asgiriya and Ramannya Nikayas, also opposed the presentation of a bill in parliament to incorporate into domestic law, the International Convention on Enforced Disappearances.

It is feared by Sri Lanka's opposition parties, that the Convention will result in Sri Lankan military men being arrested and hauled up for alleged war crimes in courts in various Western countries and also before the International Criminal Court.

A bill to incorporate the convention in domestic law is to be presented in parliament on Wednesday.

Former Sri Lankan President and Joint Opposition leader, Mahinda Rajpaksa, had already issued a strong statement against the adoption of the convention.

It is said in political circles that the Mahanayakes' statement on constitutional change and the Convention on Enforced Disappearances might have been influenced by the Joint Opposition led by former Sri Lankan President Mahinda Rajapaksa.

A section of the government also shares the view of the Mahanayakes. The Sirisena faction of the #SriLanka Freedom Party (SLFP) also wants only electoral reforms and not a new constitution with more powers devolved to the provinces especially the Tamil province in the North.

The Minister of National Dialogue and National Languages Mano Ganeshan said that government cannot go back on its electoral promise to re-write the constitution to promote post-war ethnic reconciliation.

'This government was elected in 2015 with a promise to abolish the Executive Presidency, change the constitution, and bring about electoral reforms. The majority Sinhalese as well as the minority Tamils and Muslims supported the present leaders on the basis of these promises. The minorities, especially, wanted all these three promises fulfilled. They would not accept piece meal implementation of the promises,' Ganeshan said.

Asked what might happen now that the Buddhist High Priests have spoken, Ganeshan said that the ball is in the government's court.

The Tamil National Alliance (TNA) MP and spokesman M.A.Sumanthiran said that the Mahanayakes' statement might not be set back for the constitution remaking process.

'We will have to first find out who is behind this statement. We will be talking to President about this,' he said.
TOP