Colombo, Sri Lanka -- Of all things Sri Lanka has bestowed on the world the Buddhist flag, which celebrated its 125th anniversary on April 28, is probably the most important. The 125th anniversary is special for several reasons. The Buddhist flag was first hoisted on - April 28, 1885 - an Adhi Vesak poya day, after a long struggle to establish Buddhists religious rights. 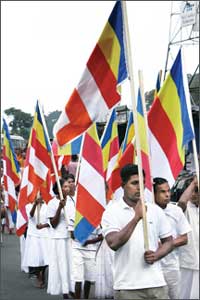 The depiction of the first Buddhist Flag was published in the "Sarasavi Sandaresa" newspaper of April 17, 1885. The Buddhist flag was first hoisted 125 years ago at Dipaduttaramaya, Kotahena, Colombo by Ven. Migettuwatte Gunananda Nayake Thera, to mark the first Vesak public holiday under the British rule. It was also hoisted in Vidyodaya Pirivena, Colombo, Kelaniya Rajamaha Viharaya and Hunupitiya Gangaramaya.

The original flag was redesigned jointly by Colonel Henry Steele Olcott, the founder president of the Buddhist Theosophical Society - and J.R. de Silva on the advice of the Buddhist clergy and published its depiction in Sarasavi Sandaresa of April 8, 1886 and hoisted on the Vesak day.

The new flag was introduced to Japan by Anagarika Dharmapala and Henry Steele Olcott in 1889 and was followed by other Buddhist countries such as Myanmar (Burma), Cambodia, Vietnam, Laos and Thailand. In 1952 it was recognised as the international Buddhist flag by the World Buddhist Congress.

The five colours of the flag represent the six colours of the aura that emanated from the body of the Buddha at the time of Enlightenment. Blue (neela) represents Loving Kindness, tranquillity and Universal Compassion; yellow (pitha), the Middle Path - abstaining from extremes of luxury and suffering; red (lohitha) stands for achievement, wisdom, virtue, fortune and dignity; white (odatha) for purity and emancipation and orange (manjestha) the Essence of Buddhism with wisdom, strength and dignity. The vertical stripe, compound of the other five colours (Prabhaswara - 'essence of light') symbolizes Truth.

"The colours of the Buddhist flag represent the Buddhas aura, which was the result of grasping the truth" explained Prof. Ven. Iththademaliye Indrasara Thera, Vice Chancellor, Buddhist and Pali University.

P. W. D Chandra Jayatillake, Secretary, Ministry of Buddha Sasana and Religious Affairs called upon the Sri Lankans to respect the Buddhist flag - an object of international veneration - during the Vesak season. "People often use the Buddhist flag to stop vehicles at dansalas. But we should learn to pay more respect to the Buddhist flag."

"The Buddha disowned the caste system and always regarded every human being alike" said Ven. Iththademaliye Indrasara Thera. He explained that the Buddha always hoped for universal peace and said that the only way to pay respect to such an amazing Being is to aspire to build a society devoid of caste, class or any other form of discrimination.

"The end of a three decade old war and the forthcoming 2600 Buddha Jayanthi have presented us with a good opportunity to fulfill our duty - both laity and bhikkus alike - of developing a peace - loving and civilized society with no racial discrimination" said Prof. Ven. Iththademaliye Indrasara Thera.

The Committee would focus on encouraging religious and Pali studies, observing sil, giving alms, improving agriculture by tree planting campaigns, ensuring the welfare of the religion through ordaining and providing training for bhikkus and renovation of temples in commemoration off the Buddha Jayanthi.

This is an effort to be shared by the mahasangha, laity the government and the private sector as well.