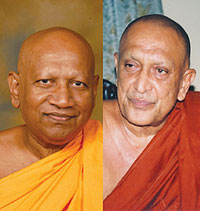 They are of the view that only a pious and intelligent leader would be able to govern the country honourably .

Excerpts of interviews with leading Buddhist monks on the constitutional amendments:

Chief Incumbent, Bellanwila Rajamaha Viharaya, Ven. Dr. Bellanwila Wimalarathana Thero queried why the government wished to bring new amendments to the present constitution which gives more power to the President when they have openly criticised the ‘78 Constitution and promised to abolish the presidency.

“Now we do not have a proper atmosphere to talk about what is good or what is bad. However there are two sides to these proposed constitutional amendments. If the unlimited executive power is not misused then we could expect a bright future for the country. But in the same manner if the power is misused for anyone’s survival or benefit then there would not be a country for our future generation,” Wimalarathana Thero told The Sunday Leader.

The Thero questioned as to why President Rajapaksa brought in amendments to the 1978 Constitution that give more power to the executive when the people have undergone immense hardships as a result of the J.R. Jayewardene constitution.

Chief Incumbent, Naga Viharaya Kotte, Ven. Maduluwawe Sobitha Thero told The Sunday Leader that a dictatorship would be created once unlimited powers are vested in the executive.

“In 1978 when President J.R. Jayewardene introduced the new constitution Colvin R. de Silva, N.M. Perera and many more experienced politicians predicted the adverse impact of it. So we are now reaping the consequences of the 1978 Constitution. That was why President Chandrika Kumaratunga gave an assurance to the country that she would abolish the executive presidency no sooner she comes into power. But however she failed to stick to her promise and served her full term,” said the Thero.

“In 2005 Mahinda Rajapaksa in his election manifesto – Mahinda Chinthanaya clearly stated that the executive presidency that has been the bane of the country would be abolished during his first term. Then what happened after he was elected to office? He claimed that he needed the power to eradicate terrorism which was fairly true.

“But now after restoring peace why does he want more power and more terms? It is a known secret that he is benefiting from executive powers. So what would happen if he gets more power? There should be a limit to any thing.”

“I do not say President Rajapaksa is a bad administrator. It was he who won the war for us. But he is not immortal. What would happen if his successors misuse these powers?  That is why we want a president or a prime minister who is accountable to the law of the land and to the parliament,” Sobitha Thero said.

Sobitha Thero further said that the proposed 18th Amendment would inflict a severe blow to the country’s state sector once the powers are given to the cabinet to appoint, promote, transfer, take disciplinary action and to remove the heads of government departments.

However Chief Incumbent, Rangiri Dambulu Raja Maha Viharaya, Ven. Inamaluwe Sri Sumangala Thero said that unlimited powers to the executive and his team should be welcome as the rulers need more power to re-build the country.

Take the J.R. Jayewardene regime for an example. He had to become a dictatorial ruler to bring the continuous agitations and strikes to a complete standstill by taking tough decisions. He did not listen to the opposition but took the decision to discipline the people. True the strikers lost jobs but still President Jayewardene had to take that tough decision not for him but for the betterment of the country.

So I think if the present rulers too could develop the country and bring back the lost glory even through a dictatorship without misusing powers then there is no harm to it,” Sumangala Thero told The Sunday Leader.

Secretary Incumbent to the Most Ven. Weweldeniye Medhalankara Mahanayake Thero of the Sri Lanka Ramanna Sect, meanwhile said that it would be unsafe to vest more powers in the executive since it could lead to a dictatorship.

“President Mahinda Rajapaksa came into power promising to abolish the executive presidency during his first term. But now he wants to continue in office with more powers. Why does he need more power and more terms of office? There is a hidden agenda behind this and a dictatorship regime is inevitable,” the Thero claimed.

Secretary Incumbent to the Most Ven Asgiriya Mahanayake Thero Ven. Anamaduwe Dhammadassi Thero said that unless the unlimited powers are exercised for the betterment of the country and its people it could be dangerous for an individual to hold office continuously with more powers.