Colombo, Sri Lanka -- Child rights activists in Sri Lanka have criticised a plan by the prime minister to ordain 2,600 boys as Buddhist monks by next May. 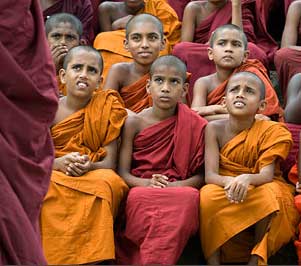 Prime Minister DM Jayaratne says the move is aimed at boosting Buddhism and lifting young people out of poverty.

Next May marks the 2,600th anniversary of Lord Buddha's enlightenment.

Activists say the boys are too young to be ordained. There have also been reports of sexual abuse in the temples, strenuously denied by the authorities.

Mr Jayaratne told BBC News the young monks would be helped financially and funded to go to university. The government also plans to provide financial assistance to their families, he said.

"We will be seeking donations from the public but if there are shortcomings, the government will provide funds," he said.

But activists are angry at the plans to ordain the boys, who they say could be as young as 10.

They say children have a universal right to be with parents, siblings and friends until they reach the age of 18.

Dr Hiranthi Wijemanne, an activist who is nominated by Sri Lanka to a UN child rights panel, said the leading Buddhist monks should show an example by opposing such schemes.

"I think it is our duty to oppose ordaining boys as it is a clear violation of children's rights," she said.

She says children from rich families are rarely ordained at such a young age.

Just one monk was convicted on sex abuse charges. There have been numerous allegations of abuse from parents and children.
Sri Lanka President Rajapaksa (l) with Prime Minister DM

Leading paediatrician Harendra de Silva urged the Sri Lankan authorities not to allow the Buddhist temples to repeat "what happened in the Catholic Church", referring to the child sex abuse scandal that led Pope Benedict to offer a formal apology.

"I can't fully compare it with Tamil Tigers' child soldier recruitment, but there are some similar aspects," Prof de Silva, a former chairman of the NCPA, told the BBC.

"I strongly condemn this crime against our children," he said, adding that the government should improve the country's economy rather than "allowing the children to be abused".

Discussing child abuse - particulary in Buddhist temples - is taboo in Sri Lanka, as it is in many conservative societies in South Asia.

The BBC repeatedly sought the government's view on fears the boys could be abused. Children's Affairs Minister Tissa Karalliyadda did not respond.