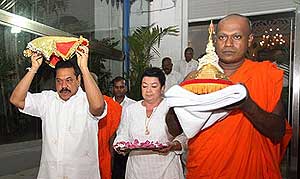 The Katina Perahera (procession) was started from the Temple Trees with participation of the President, family members, Temple Trees staff and large number of devotees of the temple.

The Katina Robe, holy relics and other sacred Buddhist objects with flower poles and flags were paraded to the temple.

The Katina dhana along with the Katina Robe was offered to Maha Sanga with great respect and devotion by President Rajapaksa and the members of the dayaka sabhawa.