Attack on four monks and damage to temple can not be attributed to guerrilla groups or to members of the LTTE. Representatives of all religions call for calm, to continue to live "as one family."

Colombo, Sri Lanka -- Representatives of all religions in Sri Lanka strongly condemn the recent attack on the Buddhist Maha Bodhi temple in Chennai, India, in which four Sri Lankan Buddhist monks were injured. 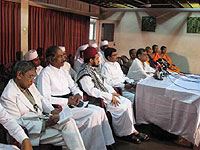 During a press conference held yesterday by members of the Inter Religious Alliance for National Unity, all participants indicated that "this is not the act of the LTTE [Liberation Tigers of Tamil Eelam, ed], or other guerrilla groups ". The conference was hosted by Colombo’s National Library Hall.

On the night of 24 January a group of about 10 people stormed the Maha Bodhi Society temple. Armed with sticks, vandals began to destroy the place, and wounded four monks who intervened to stop them.

Cardinal Malcolm Ranjith, the Archbishop of Colombo, has expressed his concern over the attack in saying: "The Catholic Church strongly opposes such acts like this."

For Acting Committee member, the venerable Nedagamuwe Vijitha Maithree Thero, this is "an act done by those who do not want peace, who do not see the beautiful brotherhood between the two religions. For this we need to act calmly and not give in to panic".  Another monaco, Ven. Dhammaransi Thero, declared: "We ask the governments of Sri Lanka and India to continue to be interested in the problem, and take the necessary measures to ensure full security and protection for all the pilgrims who visit the temple." Finally, the monk thanked the Indian government for the prompt action taken to protect pilgrims after the attack.

The Methodist pastor Fr Sarath Hettiarchchi stressed that Sri Lanka is a multiethnic, multi-religious and even multi-political country, where everyone should respect each other.

S.H. Mavulana present as the representative of Muslim community, wanted to specify that "all Muslims condemn this attack. For me, I want to encourage the faithful of all religions and ethnic groups not to move backwards. Act wisely, and go forward for national and religious harmony. "

"Avoid all the suspicious opinions that have come to the surface recently," said the rev. E.K. Yasarathna, the Baptist Church of Colombo. "Lets try to live as a one family. Like sisters and brothers in one country”.