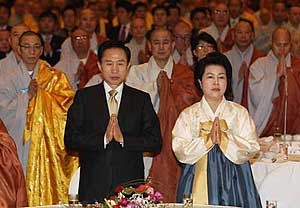 His attendance seemed to be a reconciliatory gesture aimed at Buddhists after his administration was criticized for discriminating against them last year. It was the first time Lee had attended a Buddhist event since he took office last year.

The theme of yesterday’s meeting was “Overcoming the economic crisis and uniting the people.”

In a speech, President Lee Myung-bak expressed gratitude for the efforts of the Buddhist community to embrace different values in a multi-religious country. He said the Buddhist spirit has helped the country avoid religious conflicts and as a result, contributed to uniting the people.

“I thank the Buddhist community for taking the lead in overcoming the economic crisis and bringing the public together,” Lee said. “The government will also honor Buddha’s teachings and will put forth every ounce of its energies to revive the economy and unite the people.”

Relations between Lee’s administration and the Buddhist community were deeply strained by a series of incidents last year that the Buddhist community has called religious discrimination. Among such irritants was the appointment of mostly Christians to top government positions and the omission of Buddhist temples from an online traffic map produced by a state-run agency. Then-National Police Chief Eo Cheong-soo’s appearance in posters for a Christian police event added to the anger.

The tension reached its peak when police searched Venerable Jigwan’s car looking for organizers of anti-U.S. beef protests who were taking shelter at Jogye Temple in Seoul. The Jogye Order is the largest Buddhist sect in Korea. The incident led to Buddhist leaders and monks holding services to protest the government’s pro-Christian bias.

President Lee Myung-bak made a public apology on KBS TV last September, saying, “I regret the incidents that hurt the feelings of the Buddhist community.”