Seoul, South Korea -- People no longer have to visit temples hidden among serene mountaintops to learn about the Buddhist faith. Just across from the Jogye Temple, the headquarters of the biggest Jogye Order in Korea, there is a small, yet lively library called the Buddhist English Library of Seoul (BELS). Here, you can learn, read and talk about the religion at any time. 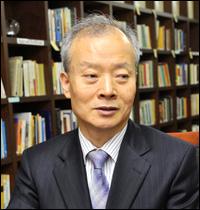 << Kang Hoh-shik, director of the Buddhist English Library of Seoul (BELS), talks to The Korea Times during an interview Tuesday. The library celebrated its second birthday last Sunday and Kang is inviting both believers and non-believers to pay a visit. / Korea Times Photo by Shim Hyun-chul

The library celebrated its second birthday last Sunday, but director Kang Hoh-shik admitted that they have a long way to go.

``Many people stress the importance of the globalization of Korean Buddhism, but that's just talk. We are not prepared for such a trend yet, and that is why we started the library,'' he said Tuesday as The Korea Times visited the library.

BELS opened in May 2007 to offer a venue where foreign monks, Zen masters and Buddhists, both local and foreign, could get together, share their studies and learn about the religion in depth with special lectures and events.

Although the world recognizes Tibetan and Indian Buddhism more than Korean, experts and believers abroad have recognized the unique culture and teachings of Korean Buddhism, which stresses meditation.

``In order to bring Korean Buddhism to the next level, especially abroad, it is important to speak foreign languages, especially English. One of the best ways is to teach people who can speak English and who are interested in the religion. Who knows? They may find it interesting and inspiring, and travel back to their homes and talk about or teach the religion,'' Kang said.

That is what is happening in Hungary with Ven. Chong An. After starting to practice Zen amid unresolved issues in his life at the age of 24, Ven. Chong An trained under Korean Zen master Seung Sahn, and returned to Hungary to teach Korean Buddhism. Eager to take the teachings to the next level, he secured land for the Won Kwang Sa (Wonkwang Temple) and joined more than 40 other people for a winter retreat there.

``It's going to be the main hub of Korean Buddhism in Europe. This has become an inspiration for everyone and we realized once again the importance of operating a place where believers and monks alike can visit whenever they want to, meet Korean Buddhists regularly and interact with them,'' he added.

The library not only offers more than 2,000 books about the religion, but also holds special lectures by respected Zen masters.

``The library itself is operated by donations from members and believers. Many people have donated interesting books for us to share with others and we are open to any type of support, from volunteer work, books and financial assistance to even just joining the classes and lectures,'' he said.

There are four basic classes offered to visitors. The English Lecture offers the theme ``How to Practice Samantha'' every Saturday at 10 a.m. and 2 p.m. The Meditation classes teach visitors ``Tibetan Meditation'' every Wednesday at 7 p.m., while group study sessions offer visitors the chance to get together and talk about the Buddhist faith, in particular ``Theravada Buddhism,'' every Friday at 6 p.m.

``All of these classes are carried out in English. Even if you're not a believer, come and just try to feel the meaning of Buddhism,'' said Kang.

The library also offers classes for children that provide practice in English and help to learn more about the religion.

``Most of the kids are brought here by their parents, some even against their will. But it's great for them to learn to meditate from a young age,'' he said with a smile.

The library is gearing up for more projects, with the most important to find a real home for visiting Zen masters and students.

``We have about 80 members who support us regularly and we hope the number increases, despite the recession. The biggest goal for us now would be finding a bigger place, complete with lodging facilities, bigger classrooms and a better-equipped library," Kang said.

``Studying with consistency is important. Meditating and ascetic exercises are not a one-time lesson, and in order to make this work we will continue to welcome visitors with open arms."

The lectures are free and you can join in after checking the time posted on the BELS Web site (www.bels.kr). The library has prepared a special lecture conducted by Ven. Chong An, which is to be held on May 9, 16 and 23. The fee is 50,000 won. Books can be borrowed for 2,000 won each, or for free by becoming a library member.