Seoul, South Korea -- The dispute over the Buddhist Jogye Order's decision to place Bongeun-sa under its direct management highlighted the sensitive relationship between the Buddhist society and the leaders of the present government. 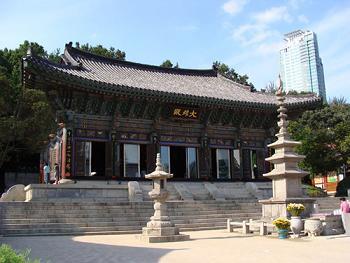 Bongeun-sa's chief priest Myeongjin has rejected the decision as the result of political pressure to remove a leftist monk from Seoul's largest temple.

Bongeun-sa, in the Gangnam area of Seoul, grew rapidly in recent years to about 200,000 registered believers. Their offerings are large enough to cover this year's budget of 13.6 billion won. Its downtown location and Ven. Myeongjin's spiritual leadership were cited as the main factors behind the eminence of Bongeun-sa among the 2,500 temples of the Jogye Order.

The general assembly of the Jogye Order, the largest Buddhist sect in Korea, decided the direct management of Bongeun-sa, meaning the Order's chief executive priest would concurrently serve as the chief priest of the temple. The order explained that direct management was necessary to establish two centers for propagation -- one in Gangbuk at Jogye-sa and the other in Gangnam at Bongeun-sa.

Myeongjin claimed that the pressure came from the Grand National Party's floor leader, Ahn Sang-soo, who met Ven. Jaseung of the Order at a Seoul hotel last November. He said he was informed that Ahn complained to the Jogye chief about having "a harsh critic of the government remain as the head of a rich temple in Gangnam." Ahn denied the priest's allegation.

Political noise in the dispute within the Buddhist community is regrettable. Myeongjin, who made his only outing from the temple during his 1,000-day prayer to attend former president Roh Moo-hyun's funeral and visit the altars of the five people who died in the Yongsan evictees' incident with a donation of 100 million won in August, may be branded as a leftist by the present ruling group.

But it is hardly believable that a ruling party leader interfered in the internal affairs of the religious organization to remove the chief priest of a temple. People await a convincing explanation from the Jogye Order and the GNP.