Korean bhikkhunis, creating a culture of their own

Seoul, South Korea -- Walk into any Buddhist temple in Korea, and you will readily find female monks, or ``bhikkhunis,’’ walking or praying in the temple grounds, just like any other male monk. Sometimes it’s even harder to notice at a glance if they are female or male; which indicates that in Korea, there are almost no hints of discrimination in terms of the Buddhist faith. 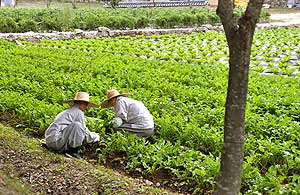 Despite the modern trend, where bhikkhunis are treated relatively equally to monks compared to other countries, they do follow some different rules. In daily life, bhikkhunis abide by nearly 348 precepts, some 100 more than male monks who follow around 250, and they also wear five pieces of clothing, while the men wear three.

Korea is one of the few nations that recognizes and continues female monastic lineages, along with only a handful of other countries, including Taiwan. Even today, there are only a few countries where women in training can receive ordination, which has resulted in foreign bhikkhunis coming to Korea to be ordained and also many female Buddhists from around the world come to study the religion.

According to Buddhist experts and historians, it was during the 4th century that the bhikkhunis first appeared in Korea.

Silla Kingdom (57 B.C.-A.D. 935) records state that the first female Buddhist was the sister of a man named Molae, who was also a devoted Buddhist. Molae was the person who helped Goguryeo monk Ven. Ado find his way to Silla and spread the religion. The first officially ordained bhikkhuni to be reported on record is King Beopheung’s queen, who was given the Buddhist name ``Myobeop.’’

Bhikkhunis played a great role during the Baekje Kingdom (18 B.C.-660 A.D.), as many were sent to Japan to spread the religion while others taught Japanese Buddhists to come to learn the religion. The Three Kingdoms era (57 B.C.-A.D. 668) and Goryeo Kingdom period (918-1392) flourished in terms of Buddhism, opening a wider door for bhikkhunis. The female monks were respected as much as their male counterparts.

Things started to change with the rise of Confucianism during the Joseon Kingdom (1392-1910). Women’s activities were restricted, thus making it difficult for bhikkhunis to carry out their duties and display their faith openly. Some were forbidden from entering temples while others had to leave their posts. Such difficult times may have made their lives and faith a bit harder to express, but their existence was not completely forgotten. According to Yi Hyang-soon, a comparative literature professor at the University of Georgia, their presence could be seen in Buddhist paintings, also known as ``Gamrodo,’’ and eventually these paintings became a way to protect their lineage and also continue their practice. Out of the 60 gamrodos found around the country, 28 of them show bhikkhunis, either praying or reading scriptures in peace.

In modern days, bhikkhunis have now found their rightful position in the Buddhist community and although some may argue that they deserve more equal treatment, it’s quite easy to see that they have created a unique culture and system of their own.

Jo Eun-su, a philosophy professor at Seoul National University, argues that despite the growing interest and number of bhikkhunis in the modern world, their general status has not seen any development over the past years.

``The bhikkhuni tradition has almost disappeared in other Southeast Asian countries such as Sri Lanka, but Korea’s lineage still stands strong thanks to its systemized asceticism and education,’’ the professor wrote in the quarterly magazine, ``Buddhist Review’’ earlier this year.

She added that several factors actually helped the tradition survive, pointing out the bhikkhunis’ cohesiveness, their efficient use and management of temples during economically difficult times and also their open minded approach toward the public.
On the other hand, the professor emphasized the problems of the ``The Eight Precepts’’ and called it ``old-fashioned.’’

The Eight Precepts were made after Buddha initially refused his stepmother and Aunt Mahaprajapati Gotami’s request to ordain herself along with 500 other women in open assembly. Jo insisted that the precepts include outdated orders, such as the rule that a nun who has been ordained for a hundred years must rise up from her seat and greet respectfully, with joined palms, a monk who has only been ordained a day, or the precept that states that a bhikkhuni must not spend the rains in a residence where there are no male monks.

The professor insisted on the need of a more practical and fair system and doctrine for the bhikkhuni tradition to carry on in a healthier way.

``Fairness is the fundamental teaching of Buddhism. Korean Buddhism must not stay behind and insist on the Eight Precepts. It is time for us to discuss more fundamental and practical issues such as female political rights (in the Buddhist circle) or the progress of bringing gender equality,’’ she said.

In 2004, Korea held the Sakyadhita International Conference, inviting more than 900 bhikkhunis, monks and Buddhists from around the world. ``Sakyadhita’’ means the daughters of Buddha in Sanskrit.

Some 2,000 monks attended the opening ceremony, while more than 1,500 appeared at the closing event, showing the importance and also the influence bhikkhunis possess in the local Buddhist community.

Along with the ongoing recognition of such bhikkhunis living and meditating in Korea, expectations have also never been higher. Discrimination and ancient precepts are not enough to stop the rich and meaningful tradition they have led throughout the years and it’s most evident in the bhikkhunis we meet in the streets, subways and temples that they will continue to do so in the future as well.

As Ven. Myoeom, who is known as the ``Godmother of bhikkhunis’’ in Korea, once said during an interview with The Korea Times last year, ``although men wouldn’t believe so, women can do everything men do. We do it with wisdom, which is more powerful.’’

Male or female, meditating and following Buddha’s teachings is the same, for it all comes down to ``the maturity of one’s soul.’’