Shaanxi, China -- Faye Wong performs at a rehearsal for a buddhist ceremony in the Famen Temple in Shaanxi province of northwest China, May 8, 2009. 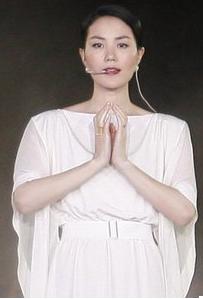 Mando-pop diva Faye Wong sang a buddhist song "Heart Sutra" during a low-key rehearsal for a buddhist ceremony in the Famen Temple in Shaanxi province of northwest China on Friday.

The pop singer, who halted her successful singing career a couple of years ago, will be the only soloist to perform at the buddhist event in the Famen Temple - one of the top buddhist temples in China. The schedule for the concert is not known yet.

Reportedly, Faye Wong took initiative in a application to sing "Heart Sutra" for the event. She arrived at the Famen Temple a few days ago with her routing being a well kept secret.

During her stay at the temple, the singer met with some of the top monks there to share her learning experience of the sutra, according to a report on the local media hsw.cn.